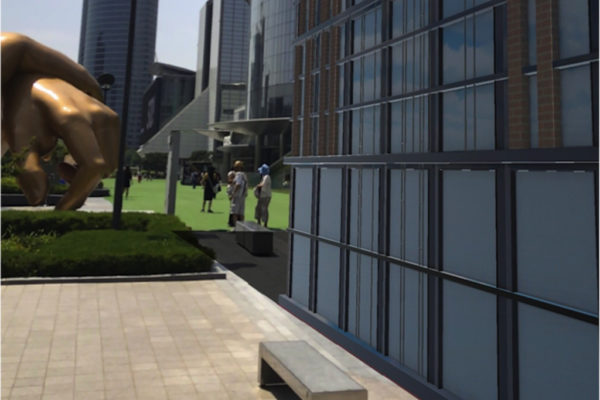 This article was written by CvikerAR and sponsored by Arlington Economic Development’s Business Investment Group.

These projects, such as new buildings and infrastructure enhancements, are viewable using an app-based platform on a smartphone or tablet and allow the user to feel as if they are seeing the completed projects with their own eyes.

Cviker’s innovative vision and partnership with JBG Smith sprung out of a unique opportunity to work with Arlington Economic Development (AED) staff to create a visualization highlighting buildings and landmarks significant to Arlington’s technology ecosystem and innovation history for the 2019 Consumer Electronics Show (CES).

Cviker first showcased the AR visualization of Crystal City and Pentagon City in AED’s booth at CES in January. This visualization highlighted prominent buildings, including the newly released Amazon HQ2 renderings. Beyond a visual aid, Cviker’s AR platform focuses on community engagement, showing the community how Amazon HQ2 will look and feel in Arlington.

To create this AR model of Crystal City and Pentagon City, Cviker combined 3D modeling with GIS and LIDAR data, along with additional animations and historical information to enhance the model. Realizing that the AR model developed for CES showed the future of Amazon in Arlington, Cviker leveraged its initial model for the opportunity to work closely with JBG Smith to make quality improvements.

By transforming the visualization from a functional, 3D model into a high-end, photorealistic and interactive experience, Cviker created an AR walkthrough of National Landing that can be seen in JBG Smith’s new marketing center in Crystal City. The viewer can perceive the relationship between the different types of infrastructure on an elevated level, providing new insights and use cases to better improve design and prepare for the future.

Cviker is a newcomer not only to the D.C. metro area, but also to the United States. A few years ago, a venue called VRBA opened in Bratislava, Slovakia. VRBA combined the simple, yet complex flavors of a gin and tonic with the exciting experience of virtual reality.

Creating virtual reality experiences during the day and gin and tonics at night, VRBA experienced immediate success, including gaining the attention of local politicians. Specifically, one local mayor with a particular interest in innovation proposed the idea of focusing on AR visualization of buildings and infrastructure renderings, and with that idea in mind, Cviker was born.

Going on to win an international smart cities competition, the Cviker team flew to the U.S. for an opportunity to work with the Smart City Works Actuator, a business accelerator based in Northern Virginia focused on growing startups in the architecture, engineering and construction industries. This is where AED learned of Cviker’s work and realized the potential it could have in helping to visualize the future of the County.

As the development for Amazon’s HQ2 draws closer, Cviker hopes to work closely with other groups, organizations and the Arlington community to ensure that equitable, safe, livable and desirable spaces are being created.

For more information about Cviker, and to see some of its AR visualizations, visit its website or download the company’s free app on the App Store called CvikerAR.