A week and a half ago, just ahead of its 9th Anniversary celebration, Mad Fox Brewing Company’s Bill Madden announced that the Falls Church brewpub would close its doors this coming Sunday, July 21.

With more breweries opening than ever, closings are also becoming more frequent, but the loss of Mad Fox has reverberated throughout the D.C. and Northern Virginia beer scenes like… well, a loss for the local beer scene.

Madden is a D.C. area legend, a mentor to brewers who can be found all over the area, and a brewer whose recipes at Mad Fox ranged from a world-class Keller Kolsch and excellent Pilsner and American Pale Ale, to robust Barleywines, to some future-forward IPAs — the Citra hop laden Orange Whip was years ahead of its time.

I always admired Two Hemispheres: A Wet Hop IPA featuring a blend of Citra and Galaxy that debuted in 2011. Galaxy was already out there, but that beer felt like a harbinger of things to come. 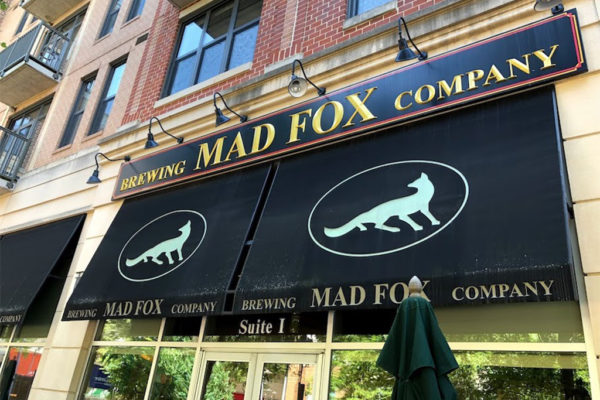 So, what happened? Mad Fox’s closing announcement cites the proliferation of taproom breweries among the challenges it faced in staying afloat. Opening in 2010, Mad Fox didn’t have the option of opening a brewery with a taproom; SB 604 wouldn’t become law until 2012, allowing on-premise retail sale and consumption at Virginia breweries. The rise of strong craft beer programs for restaurants has made tougher competitors of them, as well.

As a brewpub, Mad Fox was walking the tightrope of running two high-risk, high-overhead businesses under one roof. The irony, I think, is that as you see taprooms focusing more on food features or planning to add kitchens, it feels like we’re just a few years away from a brewpub renaissance. Alas.

Running a little early on my way into Arrowine on Wednesday, I detoured into Falls Church to drop in on the Fox. Bill was at the end of the bar, spinning all the necessary plates to keep everything running through Sunday’s last service. He noted that the lunch run was the busiest he’d seen in a while, which, of course, right?

He’s obviously had a hard few weeks but was as kind and gregarious as ever, with high praise for the staff sticking things out with him. We caught up and ended up swapping stories, which is impossible not to do with him. I’m hoping to have an interview with him up for you soon. Not before Bill gets some deserved and needed downtime, though.

This will be the last weekend for Mad Fox; if you’re around at the right time on Sunday you might just catch me enjoying a last beer or two.