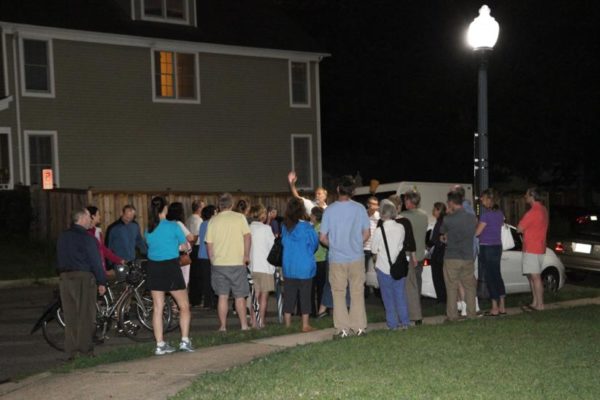 Arlington County’s streetlights are still cooler than the newly approved statewide levels, but they could be warming up.

The county is in the process of switching to the warmer, low-intensity Light Emitting Diode (LED) streetlights favored by dark sky enthusiasts and recommended by the American Medical Association. But those new lights could be years away for most of the county-owned stock.

Currently, 85 percent of Arlington’s 7,350 county-owned streetlights are LED operate at a cooler 5500K, which is similar to the color of moonlight, officials say. Arlington County will soon be releasing a new Streetlight Management Plan that will recommend a color temperature of 3000K for residential areas and 4000K for mixed-use areas, according to Katie O’Brien, spokeswoman for Arlington’s Department of Environmental Services.

The remaining older lights will be replaced at the end of their life cycle or whenever repairs or street improvements take place.

“This is applicable for streetlight installations moving forward,” said O’Brien. “This includes both new construction and replacements/upgrades. Current County-owned LED streetlights will be updated to new standards during regular maintenance or repairs.”

LED lights have a projected life cycle of 15 years or more, so the brighter and cooler lights kept in good condition could persist long after the standards are changed.

Virginia’s Commonwealth Board of Transportation voted last Wednesday to swap thousands of streetlights with warmer-colored LEDs. According to the legislation:

VDOT has ensured that the proposed LED Project has been designed to minimize lighting impacts to the environment and adjacent residents and property owners, including use of luminaires with a Correlated Color Temperature of 3000K where appropriate, while still providing proper illumination of the road in a way that best benefits road user safety and incident response.

Arlington is not the first locality to tone down its streetlight temperature levels. Chicago and nearby Takoma Park both lowered their streetlight levels to 3000K.

Dominion, which also operates thousands of streetlights in Arlington, is in the midst of its own LED conversion.