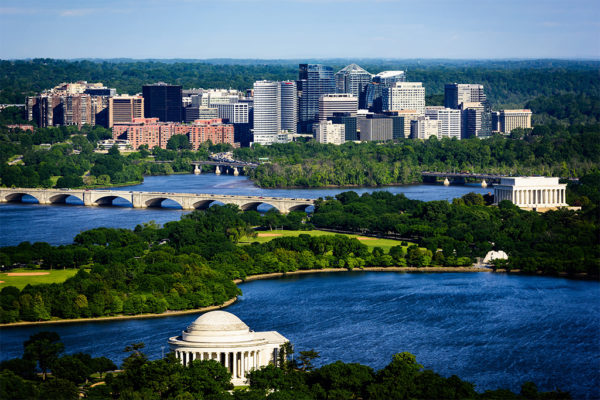 Virginia has been announced as CNBC’s choice for “Top State for Business” in 2019.

It’s the fourth time the Commonwealth has taken the top honors, which studies all 50 states based on 10 different categories of business competitiveness. And of course, Arlington’s nationally-watched deal for Amazon HQ2 was cited as a big reason for the win.

“When Amazon announced late last year that it had chosen Arlington, Virginia, as the home for part of its new, $5 billion second headquarters, it did not reach the decision haphazardly,” explains the ranking.

“The state has the nation’s best workforce, including the fourth-highest concentration of science, technology, education and math (STEM) workers. Strong school test scores, small class sizes and a wealth of colleges and universities make Virginia’s education system the best in the nation. And with Virginia Tech University announcing plans to build a new campus adjacent to Amazon’s HQ2 focused on innovation, things could get even better.”

But taking a deeper dive, it’s that critical formula of workforce and education along with a healthy dose of collaboration that’s led Virginia back to the number one spot. After all, Virginia has the number two tech workforce in the nation — much of it centered right here in Arlington and around the DMV.

Not only that, it’s one of the highest educated workforces in the nation — nearly three-quarters of our working population in Arlington has at least a bachelor’s degree; about 40% reach even higher on the educational charts. We’re leading the way in fields like cybersecurity, big data, ed tech and clean tech — all industries that are really coming to the forefront as we move into this innovation economy.

It’s also not surprising that CNBC called out Virginia’s impressive education system, and nowhere is that more prevalent than here in Arlington and around Northern Virginia.

The Amazon deal brought with it plans to build a $1B Virginia Tech Innovation campus, which will be located just next door in Alexandria. Its goal? Produce a continuing tech talent pipeline of well-educated individuals who are primed (no pun intended) to lead the way in the STEM workforce of the future.

And what’s the secret sauce to this winning business formula? Collaboration. After all, the partnership for the Amazon HQ2 deal was one that would’ve been unheard of in this region just a few short years ago. Now — we’ve shown that collaboration with partners, not just between local jurisdictions but also between the state and private partners, and a sense of regionalism simply works.

We’re stronger together — and nowhere has that been more evident than our success in landing the largest economic development deal in history and leading the way to ensuring Virginia takes the number one business spot again.