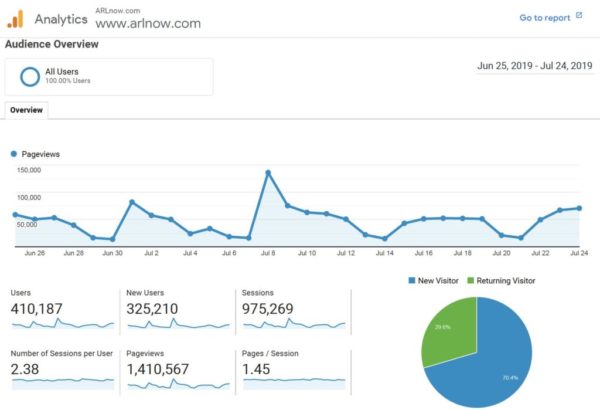 From June 25-July 24, more than 400,000 unique users visited the local news site, viewing 1.41 million pages, according to Google Analytics. The average unique user, as measured by Google Analytics, read 3.5 pages during the month, though those returning 15 or more times throughout the month accounted for more than half of ARLnow’s pageviews.

The readership figures are the highest recorded since ARLnow launched in January 2010.

“The ARLnow team is immensely proud of the local journalism we’ve been producing this year — from comprehensive storm coverage to dogged local government reporting to longer-form, investigative pieces — and this new record serves as validation that those efforts are paying off,” said ARLnow founder Scott Brodbeck. “Arlington is a fantastic community, with civically-engaged residents and commuters who care about the community they work in. Thank you to all of our readers who helped make this new record possible.”

ARLnow and its parent company, Local News Now, are also announcing the hiring of three new members of our team.

Lene Query joined our company’s business team in May as an Account Executive, alongside Content Manager Turquoise Jackson. Bringing five years of retail and restaurant experience to the job, Lene (pronounced like “Layna”) is now the primary contact for clients seeking to place advertising on ARLnow or our other sites. She can be reached at [email protected] or 703-348-0583.

Jay Westcott will be joining us in September as our first full-time photojournalist. Jay’s 15 years of professional photography experience — he previously worked locally for TBD.com, Politico and the Washington Examiner — will help bring a new visual language to our local news sites and enhance our breaking news coverage. He will also produce video for certain projects.

The new hires will bring Local News Now’s full-time staff count to eight — made possible by our loyal advertisers and patrons, and our hard-working business team. Jordan Ciminelli, who led our business team since September 2017 and played a pivotal role in training and operations, departed earlier this month to join a new venture.

“At a time when local news is facing business model struggles around the country, thanks to our dedicated readers, advertising clients and employees, we’re able to grow as an organization,” said Brodbeck. “Our growth over the last decade has been slow compared to some of the local startups we’ve profiled over the years, but being the proverbial local news tortoise — with a commitment to quality journalism, business innovation and customer service — has allowed us to continue to find success.”