Can it be that time already? Oh, it can, dear reader, and it is. I’ve already received some fall seasonal beers and the flood gates are about to open in earnest.

I’ve written about the concept of seasonal creep before, but the older I get, the less I seem to care about it. Is it a little absurd that I have two Oktoberfests in stock and one Pumpkin Ale already offered by the third week of July?

Sure, a little. But at the end of the day my policy is “Drink what you want when you want,” so I’m not sweating it too much. Except for that Pumpkin Ale; you’ll find it out there already, but too soon, man. Too soon.

What I’m doing today is giving a quick rundown of fall beers to keep an eye on, both those available now and ones on the way that I think are notable. Let’s start with what you can find on shelves right now: Sierra Nevada’s Oktoberfest landed in Virginia last week, and I’ll take any version of that anytime they want to offer it.

Every year of Sierra Oktoberfest has seen it pair up with a different German brewery to offer a different take on the style; this year, it’s Bitburger, which brought its house yeast and proprietary hop blend out of its brewery for the first time ever for the occasion. The result is a tick sharper than last year’s (made with Weihenstephaner), but very tasty and as good now as it’ll be when the weather turns. 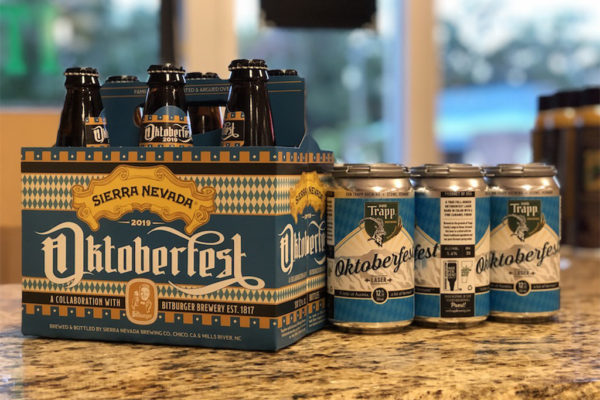 Also in stock now is the Oktoberfest from Von Trapp Brewing in Vermont. Von Trapp’s Lagers are excellent across the board, so it’s no surprise this is tasty. What I like is the judicious use of darker malts, contributing to a color that is coppery rather than brown, along with a lovely caramel note.

I don’t like to play the FOMO card, but if you’re a Von Trapp fan, the word around the campfire is that the run of Oktoberfest that just hit Virginia is the only one we’ll see for the year. Purchase accordingly.

What’s on the way? Admitting a bias up front, I’ve always loved Port City Oktoberfest, which releases tonight at the brewery before hitting the market early next week. Around the middle of August we’ll see Atlas’ Festbier arrive. Lighter in color and body and using a blend of German and American hops, it’s definitely built for a more American audience but should be as fun and show as well as our favorites from the DC brewery.

Around the end of August/beginning of September, we should see the return of one of my old favorites — the Hofstetten Original Hochzeitzbier von 1810. This brew aspires to revive the style of Märzen that would’ve been served during the days of festivities surrounding Crown Prince Ludwig II’s wedding in 1810 — the first Oktoberfest. The best part? We’re getting cans of it this year!

What fall beers are you looking forward to? Let me hear it in the comments; you always do (he said, smiling).

Read more →
More Stories
Open Houses in Arlington This WeekendEXCLUSIVE: Fort Myer Assessing Flood Damage to 26 Buildings on the Base