Two recent columns discussing Arlington’s July 8 countywide flooding and Donaldson Run’s pollution and flood damage explained how the County’s development and construction policies and practices have increased impervious surfaces and resulted in the loss of mature trees. Combined, these factors have almost certainly heightened our flood risk and intensified the damage.

Today, I focus on the July 8 flood impacts on Lubber Run Park.

An Arlington resident captured the severe July 8 flood damage to Lubber Run and its park in a series of dramatic videos. This video depicts the destruction of one of the park’s pedestrian bridges, not far from the amphitheater.

Traveling upstream, the videographer documents the severity of damage to the trail after the flood. 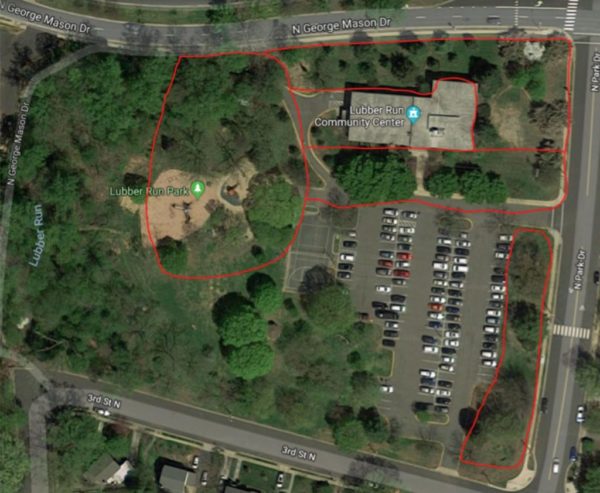 How the County fails to exercise regulatory powers it already possesses

The Arlington County Board’s repeated claims of powerlessness to take action to protect our environment ring hollow. Here is just one example of those claims.

While it is indeed true that some “rules” on some issues can only be made in Richmond, existing rules often permit adjustments to be made right here in Arlington–but only if County Board members are willing to seize these opportunities.

Development, construction, increases in impervious surfaces, and the ongoing loss of mature tree canopy all exacerbate Arlington’s risk of severe flooding. As further discussed in July’s two columns, Arlington already possesses untapped powers to control each of these contributing factors.

Yet despite the tremendous damage that occurred on July 8, elected officials and staff continue to trot out “Act of God” or “flood of the century” arguments that inspire little confidence in local government.

Had Arlington fully exercised its existing regulatory powers, the damage to Lubber Run Park and other public and private assets almost certainly would have been far less.
Arlington was lucky that no lives were lost on July 8. Next time, there’s no guarantee.