That May 5 sewer failure, combined with the multiple July 8 sewer failures, graphically illustrate Arlington’s lack of integrated long-range planning and investment in Arlington’s below ground infrastructure (e.g., sewer, storm water, water mains) even as new development continues to get a green light.

Arlington needs to provide its unsuspecting residents with a direct warning that theyare going to bear the costs of this situation until Arlington gets its act together.

Miriam Gennari and her husband own a rental property in South Arlington in 22202. That property is near Restaurant Row on 23rd St., and across from the Crystal Houses at 1900 S. Eads where building owners currently are petitioning the County to build 4-6 new buildings and add 798 new units, significantly increasing density.

Late on the evening of May 5, Gennari’s renters reported water in the basement. When Gennari arrived, she discovered 8 inches or more of raw sewage which filled the main basement area and utility room. 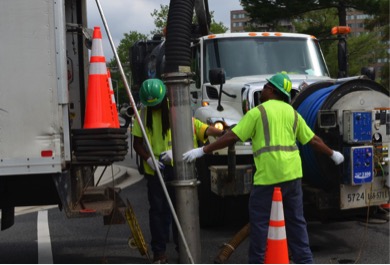 Recognizing this was not a backed-up toilet issue, Gennari called Arlington Waste Management’s emergency number (703-228-6555). County personnel arrived with equipment in less than an hour and a half. As shown in the photo below, they snaked the main sewer line.

Then, the liquid drained from the property, leaving a blanket of decaying grime all over the renters’ personal possessions, the interior structure and the mechanical systems of the home.

An Arlington County government representative gave Gennari and her husband a card acknowledging that the sewer discharge into this rental property was caused by a sewer main line back up. The discharge might well have been prevented by more frequent maintenance of trouble and grease spots.

The Gennaris first called their home insurance provider who denied their claim because that provider does not offer sewer-line backup coverage on rental properties.

“Our homeowners insurance carrier at the time told us that they do not even carry an option for such coverage on rental properties; if we had known, we would have found an insurance company that did. If County leaders only had explained how serious our infrastructure weaknesses were, many residents would be better prepared for system failures and the implications of climate change,” Gennari said.

The Arlington County government referred the Gennari’s damages claim to its third-party processor, PMA Companies. Gennari knew they were in deep trouble when the first question the PMA representative asked was “what was the cause of the clog,” signifying that any claim might depend on evidence that already had been washed down the drain.

Ultimately, PMA denied Gennari’s claim in a letter with two short paragraphs. PMA asserted that the claim had been denied based on the County’s sovereign immunity and lack of notice, and Gennari’s case had been closed. Gennari and her husband have been left to pay almost $20,000 in damages to repair and restore the premises. Gennari’s tenants similarly received only an apology for their losses.

Sadly, on July 8, scores of other households throughout Arlington were hit with sewer backups, causing widespread damages. The County also has asserted a blanket defense of sovereign immunity with respect to these July 8 claims.

Under Virginia law, the County certainly can assert a sovereign-immunity defense, but “sovereign immunity is by no means a bullet proof vest” (at p. 12).

The County is devoting too much time trying to shift away from itself all the costs of disasters like the one that befell Miriam Gennari on May 5 — and residents throughout Arlington on July 8. The County is devoting too little time educating residents about the woeful state of Arlington’s infrastructure and the major new investments needed to fortify our aging sewer, stormwater, and fresh-water systems.

Arlington needs to admit we have problems below the surface and begin a transparent, interactive conversation with residents about the long-term costs and benefits of fixing Arlington’s aging infrastructure before another family gets soaked. Long-range fiscal and environmental planning must be a top priority.