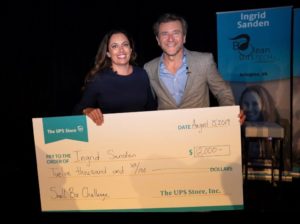 The Small Biz Challenge, hosted by The UPS Store and Inc. Magazine, tests startup founders like Boolean’s Ingrid Sanden on how quickly they can respond to a range of business-related challenges. As the grand winner, Sanden took home $12,000 and will receive some additional publicity in Inc.

Sanden’s company sells classroom kits that help get girls interested in coding, and she says the prize money will help launch a new add-on kit to teach girls about how to program sensors — like motion sensors. So far, she said the company has received good feedback: “kids are pretending that they’re spies and building all kinds of spy-catchers with their sensor kit.”

Last week’s contest required Sanden to win a game of five questions which she says was “nerve-wracking” but credited her experience as a violinist to helping be comfortable under pressure.

One question that helped her win required her to respond to a good tweet and a bad Yelp review as a business owner in less than 30 seconds. The other was the final question, which required her to make up a pitch in real time about a company and a product she hadn’t seen before — all while following a PowerPoint pitch deck she also had not seen before.

Sanden was given the task of pitching a doughnut company pitching a gluten-free doughnut.

She says she was able to sell the gluten-free dessert as a healthy choice. 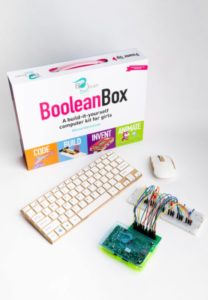 Boolean won first place after being selected from 1,700 applicants in June to become one of 10 semifinalists headed to the Big Apple.

Sanden said she’s long seen contests like it shared on social media, and thought this one could be a good fit for her.

“This one was really easy to enter and I did it and kind of forgot about it until I was contacted about being in the top 10,” she said. “I’m in a couple more contests like this right now waiting to hear if I’m going to advance.”

“People who see these opportunities, just enter it,” Sanden added. “What’s the worst that could happen?”

Boolean Girl is split into two separate entities: the company selling classroom kits as well as a non-profit that’s running summer camps and after-school classes — including in Arlington. Since launching in 2014, Sanden says she and her two co-founders have sold the kits in 30 countries and across the country.