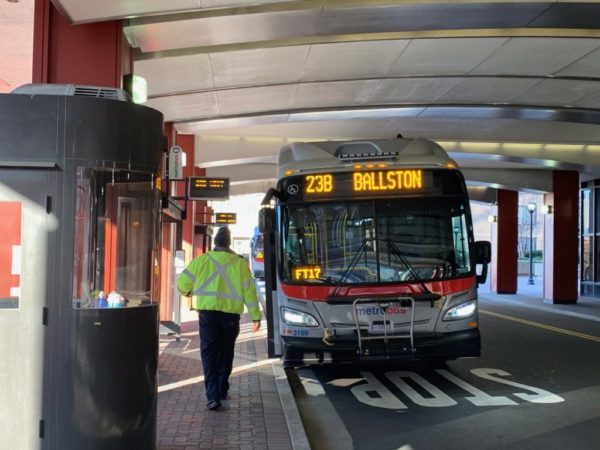 One person was taken to the hospital after a hazmat incident at the Pentagon’s bus bay this morning.

Arlington County firefighters, including a hazmat team, were called to the bus terminal outside the Pentagon around 9 a.m. for a report of the driver of a Metrobus having medical symptoms after smelling a chemical odor on the bus.

A police officer also reported similar symptoms, according to scanner traffic. The officer was treated on the scene and released, but the driver was transported to Virginia Hospital Center for evaluation. The driver was reported to be in good condition, Arlington County Fire Department spokesman Capt. Ben O’Bryant said.

Firefighters did not find anything hazardous on the bus.

“Crews believe there might’ve been a refrigerant leak on Metrobus that caused a couple people to feel ill,” O’Bryant told ARLnow. “[The] bus was shut down, and no dangerous readings were found when crews ran meters through the bus.”

Shortly after the bus driver was transported, ACFD turned the scene over to WMATA.