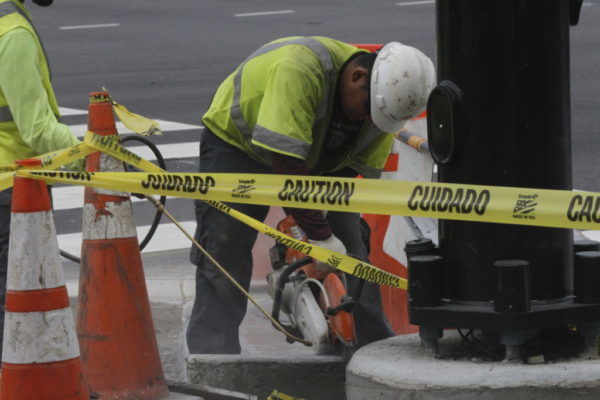 (Updated at 10:35 a.m.) Unusual Decorations in Former Startup Office — “The walls were covered in ‘hundreds’ of framed detective and noir movie posters, bills and actor headshots, McAfee said. There was food still in the office fridge, wedding photos on the desks, and a sign that read “Danny” in an office that is presumed to have belonged to Trustify founder Danny Boice.” [Washington Business Journal]

ACFD Trains at Waterpark — “Members of our Water Rescue team were at Great Waves Waterpark today training with their counterparts from @AlexandriaVAFD. Members practiced their skills while getting more familiar with each team’s members & capabilities.” [Twitter]

Glass Recycling Drop-off Gripes — Since Arlington County announced that glass was to be thrown in the trash, rather than placed in the recycling cart, many residents have been opting for the second option: bringing glass bottles and jars to designated recycling drop-off centers. But the drop-off bins reportedly only allow you to insert one item at a time, which has led to frustration and mishaps. [Falls Church News-Press]

Local Senior Sails Solo to Bermuda — “Juan Perez didn’t let age affect his decision or performance when the sailor recently decided to return to his hobby of boat racing. The 85-year-old longtime Arlington resident and retired mechanical engineer purchased a sailboat – a 28-foot tartan – then sailed alone for one leg of the  recent Bermuda One-Two race, from Newport, R.I., to St. George’s, Bermuda. He was the oldest competitor and had the smallest boat.” [InsideNova]