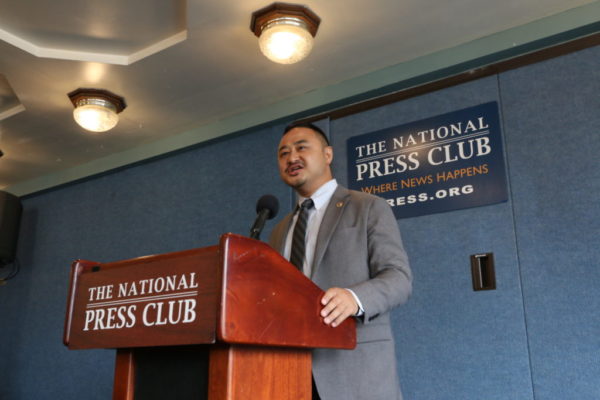 “The end goal is to provide the most cost effective tool for our agencies, our community and our employees, to incentivize behavioral changes,” said Dr. Lei Zhang, who was in charge of creating the app as director of the University of Maryland’s Transportation Institute.

A pilot version of incepTrip first hit the app stores last year after being by developed by Commuter Connections, a Metropolitan Washington Council of Governments initiative, and the Transportation Institute.

The app features a reward system that gives users “points” when they choose a transportation mode that reduces carbon emissions — like the bus or biking — and gives $10 cash awards once users accumulate at least 1,000 points. At 2,000 points users can receive a check for $25, and at 3,500 points they can receive $50.

The incentives are funded through state and federal transportation departments.

VDOT transportation planner Heidi Mitter said the department “has a big emphasis on multi-modal transportation” that pairs with the app’s mission.

“Arlington is dense and has a lot options,” Mitter said of transit in the county, telling ARLnow that hopefully that meant this app would benefit the county’s residents and commuters.

The app could also help Arlington’s employers, many of which have workers commuting in from other jurisdictions, said Nicholas Ramfos, Director of MWCOG’s Transportation Operations Programs.

“Particularly for employers if they’re having parking issues or other types of recruitment retention issues this is a great way to offer these travel options tho those employees and help reduce some of the congestion that coming into that area,” he said.

When asked, Ramfos added he “absolutely” believed the app could help ease the expected increase in traffic from Amazon’s HQ2, which has started the hiring process for the 25,000 jobs the company promised the county.

As of yesterday (Wednesday) planning a trip from L’Enfant Plaza to Ballston for this reporter’s commute to work suggested driving (which earns 11 points) or taking Metro’s Blue or Silver Line (for 100 points). Plotting this same 7 mile route by bike would also earn a user 100 points.

The point difference is not always consistent, however. A trip from Ballston to the Arlington Mill Community Center can earn a user 2 points if they drive — or 10 points no matter if they’re walking, grabbing the ART 41 bus, or hailing an Uber.

The app was funded with a $4.5 million grant from the U.S. Department of Energy’s Advanced Research Project Agency, but it is far the only trip-planning app in the D.C. region. Arlington, for instance, launched trip planning app Car Free A to Z in 2014.

Zhang says one difference with incenTrip is its use of artificial intelligence to learn a user’s preferences and begin tailoring the recommendations to their needs.

The feature drew questions about privacy from the audience at a press event in D.C. Wednesday morning, to which Zhang replied that users are notified of any data collected and that personal information is scrubbed before the data is stored on servers.

The app informs users that the information they’re required to enter about their name, employer, home and work address are kept private, but warns in its privacy policy that information can be turned over to law enforcement “to investigate or remedy potential violations of our policies, or to protect the rights, property, and safety of others.”

Kanti Srikanth, MWCOG’s head of transportation planning, told those assembled in the National Press Club on Wednesday that he hopes data from the app can one day be included in the organization’s regular analysis of traffic patterns, but staff would need to be mindful of privacy issues.

“We are continuing evaluating how we can best use it,” said Srikanth.