After searching around a shed and checking under all the cars in the apartment parking lot, Arlington Animal Control Chief Jennifer Toussaint had returned to her van to think. Then a woman walked up to the window, mouthing a question and pointing behind us: “Kittens?”

Sure enough, after Toussaint followed her to the far side of the lot in Arlington’s Forest Glen neighborhood, she spotted one, tiny white paw disappearing up into the engine block of a dark green sedan. A tipster who called earlier that morning about kittens was right.

The head of the county’s animal control office used cans of tuna and YouTube videos of kittens crying to lure two little tabbies and one inky black feline out from under the car. While she did, the car’s owner came out of the building and sat on her walker next to us.

Angela Davis said her car had been damaged in a crash and hadn’t moved for weeks.

“The kittens were probably born there,” said Toussaint.

Davis nodded, saying she had spotted movement underneath it a week ago. “I said, ‘My goodness, there’s something moving!'”

But after an hour of all the tricks that Toussaint knew — like knocking her belt on the engine to scare them out and holding one of the siblings near the hiding space — one kitten stubbornly remained.

“I have to go, my cases are starting to back up,” she sighed, and noted in her case management system she’d be back.

It was one of about a dozen calls for service that Toussaint received during the several hours ARLnow spent shadowing Arlington Animal Control last week. During that time, the calls she received included a request to surrender a dog, remove a dead squirrel, investigate a dog-selling scam, and check on abandoned dogs in an apartment, among others.

Toussaint said animal control responded to about 3,500 cases last year, not including some of the smaller requests staff can solve over the phone.

The county’s animal control office is located in the Animal Welfare League of Arlington (AWLA) building at 2650 S. Arlington Mill Drive. It employs six staffers compared to the shelter’s 40.

At the end of the shift, Toussaint returned to her blue and white office where her Boston Terrier rescue Reagan sleeps in the corner and Toussaint can be found dual-wielding the phone and keyboard to handle multiple requests for service. She said this represented a medium-busy day.

“You’ve never going to have a day when you’re out of calls to run,” she joked. 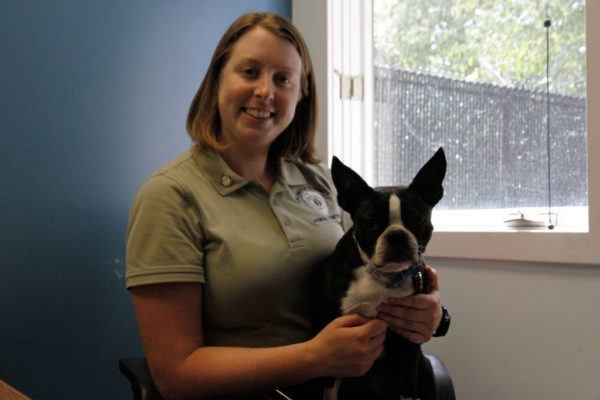 Although “animal” is in the job title, the Chief noted a big part of the calls are more about helping the human residents of Arlington County, like when she dropped off cat food to a woman with disabilities in the Green Valley neighborhood.

Several cats waited on the front steps for her as she exited the woman’s house, tails swishing as they smell food. They are part of the 30 feral cat colonies Toussaint says populate Arlington. Animal control works to neuters the cats and helps local caretakers afford food and shelter.

“Some of the caretakers started with a population of 40 cats,” she says. “Eight years into it, I go out and they have six.”

Toussaint guessed that the mother cat in the Forest Glen parking lot had split from a nearby feral cat colony. We ended up naming her three rescued kittens after famous fictional car mechanics: Mercy from the Mercy Thompson book series, Zuko from “Grease,” and Gabriella from “The Man from U.N.C.L.E.”

Toussaint spent most of her afternoon driving in her department’s vehicle to respond to the calls, such as knocking on a Shirlington apartment door where the management company feared the tenant had abandoned their dogs.

As an arm of law enforcement, animal control can seize abandoned animals but they require a warrant and that requires proof that the animals have been left alone for at least four days. Toussaint leaves a notice and tapes over the door to show if the tenant comes and goes.

The van she drives is recognizable with the AWLA logo and the “RSQUEM” vanity plate. (The lone male animal control officer was coincidentally assigned to another vehicle which bears the “NEUTER” license plate.)

Bags of cat food rattle against nets and dog crates in the back of  “RSQUEM,” but one of the most important pieces of equipment in the vehicle is the hand radio officers now keep with them. Animal control officers didn’t have radios to call for back-up from ACPD until Toussaint got the county to approve them last November.

“Sometimes you don’t realize you’re in danger until you’re truly in danger,” she said of the job, adding that the radios are an important part of animal control safety since officers are often alone.

When it comes to residents’ safety, one of her top priorities is preventing exposure to rabies and making sure anyone who comes into contact receives the necessary emergency treatment. 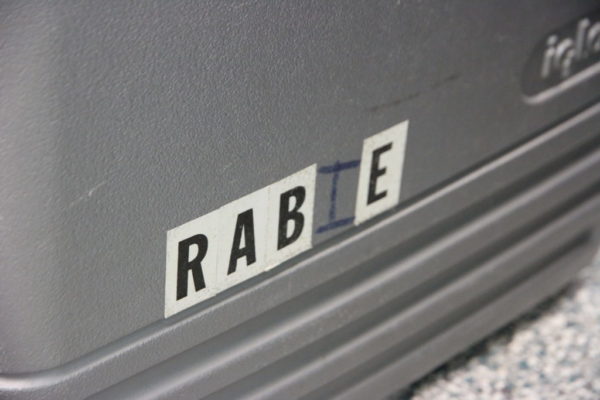 She says her worst nightmare was almost realized a few years ago when a 6-year-old brought a live baby raccoon plucked from the sidewalk to an after-school program and the supervising adults let the children pass it around.

When she arrived to program to take the raccoon, she said she saw gum in the hair on the back of its head.

“Oh no,” she remembered thinking. “You kissed it.”

Raccoons aren’t typically active during the day, and it’s unusual for parents to leave their young unsupervised. If the critter did have rabies, it meant potentially all 19 people in the room were exposed — a situation she had to warn the emergency room about in case they got flooded.

Luckily, the young raccoon tested negative for the deadly disease.

On the day ARLnow shadowed Toussaint, she delivered a dead bat in a cooler to the Department of Health, which shipped the mammal caught in an Arlington home to a state lab in Richmond for rabies testing.

Since becoming Chief in 2016, Toussaint says no Arlington resident has caught the deadly disease. For most Arlingtonians, rabies, and wildlife in general, are not something they need to worry about, she said.

“I think part of us doing our job well is people not thinking of it,” she said. “We’re the mystical people who take care of it.”

For more information on Arlington’s animal services, including low-cost spaying and vaccinations, Toussaint asked people to check out AWLA’s website.

Partial funding for this reporting provided by ARLnow’s Patreon community.