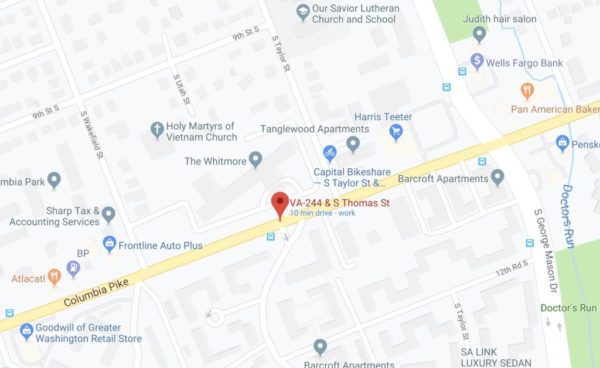 (Updated on 8/31/19) Two men, one armed with a gun, carjacked a man in a parked car along Columbia Pike early Wednesday morning, according to Arlington County Police.

The alleged carjacking happened shortly after midnight on the Pike at S. Thomas Street.

The victim was forced into the backseat but was dropped off unharmed several blocks away, near the corner of the Pike and S. Four Mile Run Drive, as the suspects fled, police said. The suspects were later arrested in Fairfax County, according to an ACPD crime report, below.

CARJACKING (late), 2019-08280013, Columbia Pike at S. Thomas Street. At approximately 1:10 a.m. on August 28, officers were dispatched to the police station for the late report of an armed carjacking. Upon arrival, it was determined that at approximately 12:20 a.m., the victim was inside his parked vehicle when he was approached by two unknown male suspects, one of which brandished a firearm. The suspects stole the victim’s personal property before forcing him into the backseat. The suspects fled the scene in the vehicle and dropped the unharmed victim off at the corner of Columbia Pike and S. Four Mile Run Access Road. A lookout was broadcast and the suspects were later apprehended in Fairfax County. Charges are pending.