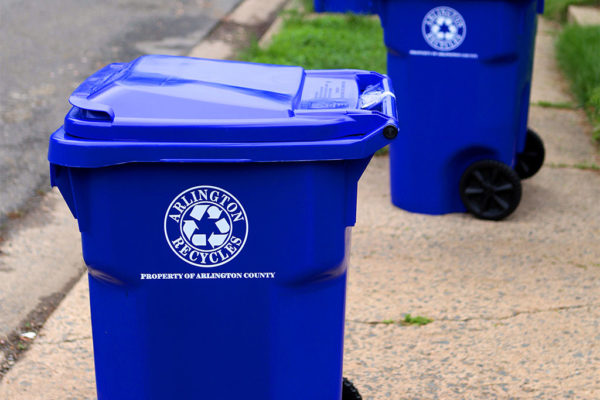 (Updated at 2 p.m.) Arlington residents have gone out of their way to chuck 200 tons of bottles and jars at a pair of drop-off locations since the County Board removed glass from the list of recyclable materials.

In April, county officials asked residents to throw their glass away in their black trash bins instead of blue recycling carts, citing the rising costs of recycling the material.

As an alternative, the county set up two designated glass drop-off sites at Quincy Park (N. Quincy Street and Washington Blvd) and the Arlington Trades Center (2700 S. Taylor Street). From there, the glass is transported to Fairfax County where it is turned into sand and gravel used in construction.

Schwartz said in April he hoped to identify three additional drop-off sites by August. The month has since passed, but officials say they’re close to announcing the new sites.

“I don’t want to jinx it, but it should be a matter of weeks,” said Peter Golkin, spokesman for the Department of Environmental Services. “We live in a tiny county where land is at a premium, so it’s a matter of making sure we can put the bins in a space where we can collect them with big trucks.”

Just over two-thirds of respondents to an ARLnow poll in May said they think Arlington should keep recycling glass in the residential recycling stream, no matter the cost. Some experts, however, say the cost of recycling glass outstrips the marginal environmental benefit compared to simply sending it to a landfill.

Update: Arlingtonians have recycled some 200 tons of bottles and jars since April when glass-only bins were placed at Quincy Park and the Trades Center. We're shattered/crushed at the discrepancy from yesterday. More drop-off sites coming quite soon. https://t.co/uVZRCYAdIg pic.twitter.com/aAYshppblJ