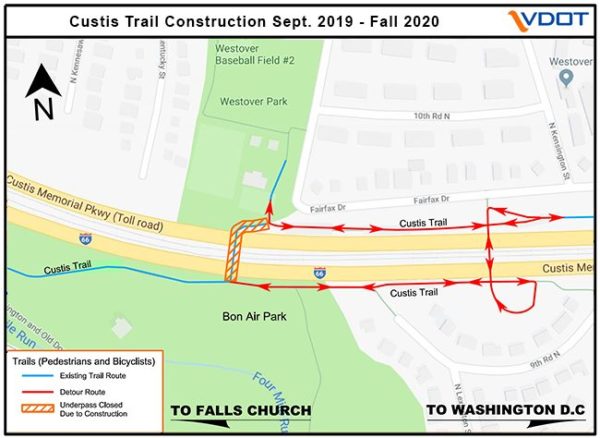 (Updated at 3:15 p.m.) A portion of the Custis Trail in Arlington will be soon detoured for the next year as crews continue to work on the widening of Interstate 66.

Starting Monday, September 16, trail riders and walkers will not be able to follow the Custis under I-66 where the trail now passes near Bon Air Park until fall 2020, per the Virginia Department of Transportation (VDOT). Instead, the department will detour people over the highway via an existing pedestrian bridge about 750 feet from the underpass.

“Extensive work will occur on the I-66 bridge that runs above the trail, which requires the underpass to be closed for safety,” VDOT officials wrote in a statement yesterday (Wednesday.) “As part of the construction, the Custis Trail alignment will be modified to improve safety for trail users.”

The pedestrian bridge travelers will be re-routed to is paved and connects the Custis Trail to Fairfax Drive near Kensington Street.

The trail closure itself was previously expected to start this past May.

“Construction schedules can be fluid with design built projects, but overall we are still on track and schedule,” VDOT spokeswoman Michelle Holland told ARLnow today (Thursday.)

The $85.7 million highway widening project also closed a section of the W&OD Trail between Little Falls Street and Lee Highway. That trail section will remain closed until next fall as crews build a new bridge over Lee Highway.

Holland said while construction crews work on widening the I-66 overpass near Bon Air Park, crews will also add a rotary to the south side of the Custis passage underneath. The new roundabout is designed to eliminate the sharp right turn into the tunnel that currently causes conflicts between those entering versus exiting the passageway. She added that current plans call for no trees to be cut down in the park.

As part of the I-66 project, officials have pledged to make several improvements to county’s trails, including new park benches, bike shelters, fencing, and trail signage.

END_OF_DOCUMENT_TOKEN_TO_BE_REPLACED

More Stories
Rosslyn’s Fire Station 10 Will Include A 26-Foot Fire Nozzle SculptureAs MONA Membership Grows, So Does Its Public Outreach