If you want to remain in the dark about the contents of the mysterious Ballston time capsule, which is set to be opened next year, read no further. 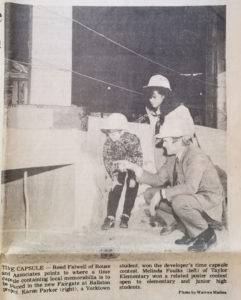 “In 1988, it seemed like 2020 would never arrive, but here it is in the blink of an eye,” Schaedig said. “I just turned 40 and the time capsule is all that I have been thinking about as I have been waiting for this day for a long time.”

In the 31 years between the time capsule was buried and now, Schaedig said some of her memories from the burial have grown hazy, but she reached out to her third grade teacher to help put more details together.

“It was a big deal at the time,” Schaedig said. “I’ve always thought about it. I recall a couple months ago I was driving in the car with my mom and kids and I said ‘2020 is coming, is there anything on the building?'”

Schaedig saw the plaque and inquired inside the building, eventually being directed to the top floor where the building’s owners told her what a spokesperson for WashREIT told ARLnow yesterday: the capsule is there and but the company has no idea what’s inside.

“I remember seeing a steering wheel with an airbag, which was new at the time, and maybe some Redskins memorabilia,” Schaedig said. 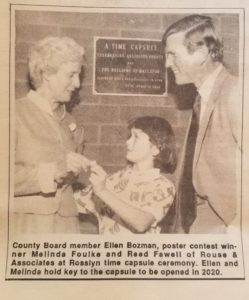 An article in the Northern Virginia Sun said a signed baseball, old coins and a postcard from an Arlington auto dealership were included as well. The article notes that Schaedig — then Melinda Foulke — added a poster showing how America has changed since the Constitution was signed.

The poster selected via a competition for local elementary school students.

“The contest presented local teachers with an opportunity to review Ballston’s evolution from farmland in the 1800s to the retail, business and retail center county planners forsaw when they wrote the Ballston Sector Plan in 1980,” the Sun noted.

Foulke said she dug up old news footage her mother had kept around, in which the building owners talked about how Ballston was poised to become the new downtown of Arlington.

“They talked about how in the future, there were unlimited possibilities because of the number of corporations moving in,” Foulke said. “They were predicting that with growth between Rosslyn and Ballston, [Arlington] would have more office space than Miami.”

The video does show some items being placed in the capsule, confirming Foulke’s memories of a steering wheel and a Redskins pin.

WashREIT said they were unsure how to open the time capsule. One of the old clippings shows Schaedig and the late County Board member Ellen Bozman holding a key to the capsule. Schaedig says she doesn’t know where the key is now.

“I hope to go when they open it,” Schaedig said. “It’ll be exciting to bring my kids and my family. It’s silly, but it’s been a part of my life.”