A few weeks back, I lamented the state of IPAs and brewing in general, after an evening spent trying about a half dozen new-to-me beers that yielded only one good, drinkable brew.

I think it’s only fair, then, that when I come across a new brewery that impresses me, that really stands out, I should take some time to acknowledge it.

A recent drop of beers from Twelve Percent Imports — a fantastic broker of hipper-than-thou, hard to find breweries the world over — included some breweries that were new to Virginia. One of those was Public Access, a name I’d heard and seen bandied about but had yet to try anything from. There’s next to no info on the brewery out there. I had to reach out to Twelve Percent to learn more.

Public Access Liquids is essentially one guy, Ramon Manuel Manrique Hung, contract brewing along the lines of Stillwater or Evil Twin. A Venezuelan native who fell in love with beer living in Belgium, Hung found himself working at Tørst, the Brooklyn beer bar opened by Evil Twin himself Jeppe Jarnit-Bjergsø.

Hung is the latest branch of a brewery tree whose roots can be found at Tørst. Other bartending alums include Joey Pepper of Folksbier and Anthony Sorice from Root + Branch.

According to Twelve Percent, Hung’s aim with Public Access Liquids is to take “an ultra-modern, forward-thinking approach to beer design and recipe development, but instead of crafting beers specifically designed to stay local, creates them for the express purpose of sharing with high-end beer enthusiasts far and wide.”

Two Public Access beers were offered to me on this shipment; I opened both for sampling among a group of hazy IPAs and Pale Ales from Richmond’s Väsen Brewing (their Azanian Passion, which is excellent), and another new-to-Virginia brewery, Columbus, Ohio’s Hoof Hearted (I know, I know), whose Pale Ale and IPA were very tasty.

What stood out to me about the Public Access beers was that they stood out: they were hazy and heavily late and dry-hopped for sure, but not “hot” or obnoxious with their more tropical and citrusy notes like many can be. 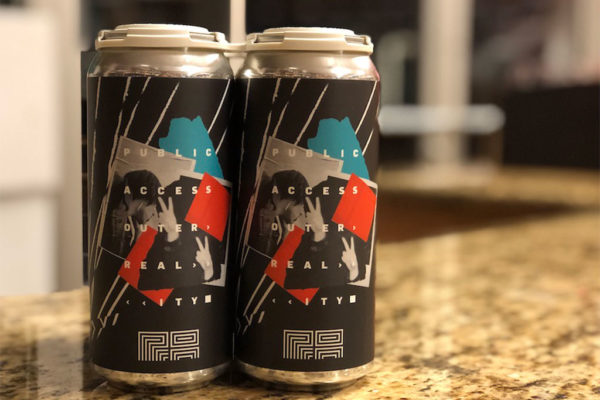 The first one we tried, Outer Reality, was a 7% ABV IPA double dry-hopped with Columbus, Mosaic, El Dorado, Simcoe and Comet. The Columbus and Comet jumped out at me — these are hops that went into commercial use in the 70s and are far from the overripe tropical fruit bombs you typically see in New England IPAs.

The resulting beer was hazy for sure, but with a much more “traditional” set of hop characteristics — citrus/grapefruit-forward, piney and most of all dry. It’s a unique and welcome take on the NEIPA.

The other was Suspended Disbelief, a Double IPA at 8% ABV with Galaxy, Citra, Idaho 7 and Simcoe hops; much more in-line with the typical juice-bomb IPA. That said, the beer also came across impeccably balanced for the style, while still displaying all the mango/orange/stone fruit notes you’d expect from a beer with its hop schedule.

Only a handful of Public Access beers have been produced and, as noted, only two have shown up here in Virginia, but I have to say: so far, so good. Keep Public Access on your radar.

Note: Suspended Disbelief has sold out at Arrowine, but some Outer Reality is still in stock. Check your favorite local bars and shops to see who might have what.