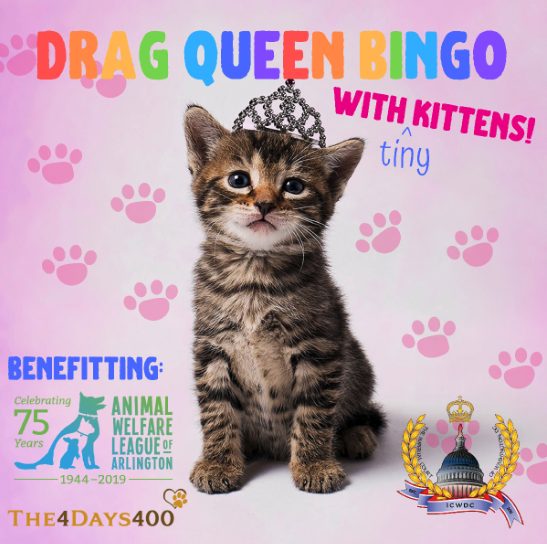 This weekend, drag meets kittens for a sold-out show of “extravagance and cuteness” at the Arlington Cinema & Drafthouse.

All of the tickets have sold out for the fundraiser this Sunday, October 6, at 7 p.m at the Arlington Drafthouse (2903 Columbia Pike). During the performance, drag queens will lead a bingo game with the audience to raise money for animal welfare causes — as well as bring some special furry guests.

“The ladies of the Imperial Court will be calling bingo with their signature flair and we will have kittens from the Animal Welfare League of Arlington’s renowned Kitten College available for adoption and adoration,” the event’s webpage reads.

The Imperial Court of Washington D.C. is part of a long-time LGBT+ charity which raises funds through drag events and performances.

Proceeds from this Sunday’s event will go to “critical needs” at AWLA, per an email from the organization which operates a shelter as well as the county’s busy animal control.

The rest of the funds raised will be donated to the  nonprofit, Caring Hand Animal Support and Education, which is running a spay and neuter project in the Dominican Republic later this year.

The sold-out show comes as local drag queens are increasingly stepping onto new stages in Arlington after years of performing mostly in gay bars.

END_OF_DOCUMENT_TOKEN_TO_BE_REPLACED

More Stories
After Decades in Safekeeping, Thousands of Historic Documents Have Returned to ArlingtonThe Little Beet Set to Open at Pentagon City Mall By End of the Month