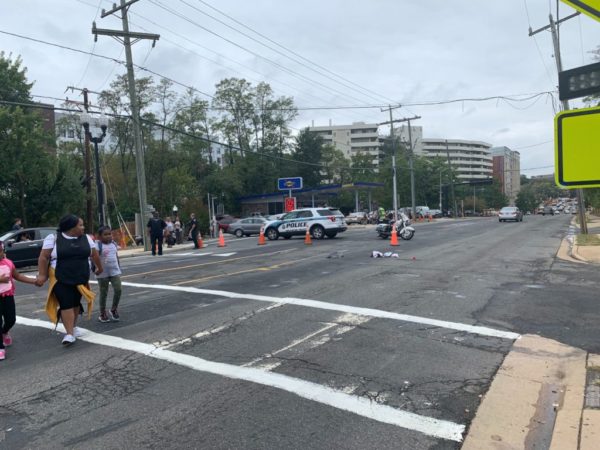 Earlier this week, a woman was struck by a van in a hit-and-run while crossing Columbia Pike at the intersection with S. Frederick Street.

The same intersection has been the site of several other crashes, according to data Arlington County Police Department shared with ARLnow. Between November 2016, and September 2019, there were 20 vehicle crashes at the same intersection — three of which involved pedestrians or cyclists.

ABC 7 reported that residents say the intersection is notorious for close calls between pedestrians and motorists, but the county isn’t able to install a traffic signal until nearby construction ends.

“If you wait long enough you’ll see a near miss.”-local resident

In only 30mins @ABC7News saw 3 close calls at a crosswalk people say is dangerous. The same Columbia Pike c/walk a few days ago where a woman was hurt in a hit-n-run.

What’s @ArlingtonVA doing about it, at 11pm. pic.twitter.com/ZpWZksUjEu

Data captured by ACPD between November 2016 and September of this year also show that another nearby Pike intersection at S. Columbia Street and S. Dinwiddie Street has seen even more numerous crashes. The Dinwiddie and Columbus intersection, near the Arlington Mill Community Center, has resulted in 28 crashes since the beginning of 2018, 6 involving pedestrians.

The rate of recorded crashes is similar to the dangerous Rock Spring intersection of Little Falls Road and Old Dominion Drive, where public outcry and ACPD’s reported 27 crashes and 9 pedestrians injured in the last two years has led county officials to ban left turns during rush hour.

Officials have expressed concerns about safe passage for cyclists and pedestrians in the area for 15 years. The Pike and S. Dinwiddie intersection was also the subject of a special ACPD pedestrian traffic enforcement campaign in 2015.

The intersection of Frederick Street and the Pike is marked with a striped crosswalk and flashing lights to alert motorists of crossing pedestrians, the latter of which was an addition made in recent years.

ACPD spokeswoman Ashley Savage told ARLnow that the police department changed its system used for keeping track of incidents like these in November 2016. Since then there were 64 total crashes on the Pike between S. Dinwiddie Street and S. Greenbrier Street. All told, 10 of those crashes involved pedestrians or cyclists.