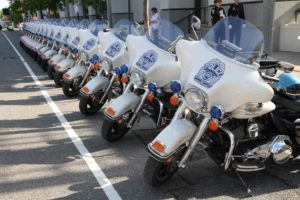 Arlington County police will be handing out traffic tickets and jaywalking citations tomorrow as part of a spring pedestrian and bicycle safety campaign.

The enforcement detail will take place during the morning rush hour and around lunchtime, at intersections in Rosslyn, Courthouse and on Columbia Pike.

Among the intersections where officers will be stationed is the so-called Intersection of Doom at Lee Highway and N. Lynn Street.

In addition to issuing citations, police personnel will be handing out safety information to drivers, pedestrians and cyclists.

On Tuesday, March 24, 2015, from 7:00 a.m. until 9:00 a.m. and again from noon to 1:00 pm, officers with the Arlington County Police Department’s Special Operations Section will be out promoting the 2015 Spring Pedestrian & Bicycle Safety Awareness Program. The pedestrian safety enforcement detail will be held in the Rosslyn, Courthouse and Columbia Pike areas. This campaign will run from March 23, 2015 through April 19, 2015. Officers will enforce traffic, bicycle and pedestrian laws at the intersections of Lee Highway and N. Lynn Street, N. Courthouse Road and N. 15th Street, Columbia Pike and S. Dinwiddie Street and Columbia Pike and S. Scott Street.

The detail is part of the 2015 Street Smart Pedestrian, Driver, and Bicyclist Safety Campaign and the Arlington Police Department’s Pedestrian and Bicycle Safety Awareness Program to promote pedestrian and bicycle safety across the region. These programs are set up to carry out education and enforcement campaigns throughout the year in order to ensure everyone shares the roads safely. Approximately 25 percent of the traffic fatalities in the Washington area are pedestrians and bicyclists, with nearly 90 deaths per year.

Officers will ticket motorists who violate traffic laws or do not yield for pedestrians in crosswalks. In addition, pedestrians will be cited for jaywalking. Public Service Aides will hand out safety information to drivers, pedestrians and bicyclists who commute through these busy intersections.