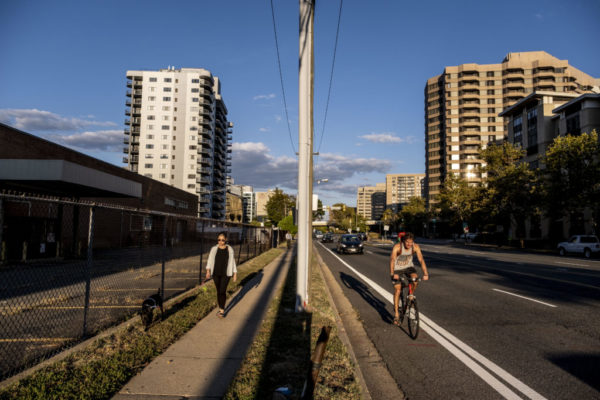 Update on Park Shirlington Plans — Owners of the Park Shirlington apartments are “advancing plans to build 612 new apartments and townhomes on the property and renovate 105 existing homes. That adds up to a total of 717 units on the 16-acre site, located just south of the Village at Shirlington and adjacent to Interstate 395. The developers plan to build 189 new apartments in a first phase of the project, then subsequently build about 267 more apartments and 156 townhomes, according initial plans presented to Arlington County officials.” [Washington Business Journal, UrbanTurf]

First Responders Train Caps for ‘Violent Incidents’ — “We take great pride in providing high quality training programs to citizens so that they can help us save lives. Last week, @ArlingtonVA police and firefighters trained members of the @Capitals administration staff in how to respond to violent incidents.” [Twitter]

ACPD Stepping Up Patrols for ‘Joker’ — “Arlington County police said they are conducting extra checks around movie theaters in the county, but they also said that there are no known threats.” [WUSA 9]

Arlington GOP Outreach Effort — “With control of the General Assembly at stake on Nov. 5, the Arlington County Republican Committee is taking a page from the outreach efforts of its counterparts on the Democratic side. The Arlington GOP is asking volunteers to write personal messages on postcards that are being mailed to Republican-leaning voters in key legislative districts across the commonwealth.” [InsideNova]

Nearby: New Development Opening Near Fairlington — “A new apartment complex is scheduled to open in the West End later this year, with a Harris Teeter and a Silver Diner location coming down the road. Array at West Alex is a mixed-use development at 3445 Berkeley Street — the very northwest tip of the city at the intersection of N. Beauregard Street and King Street, near the Fairlington neighborhood.” [ALXnow]