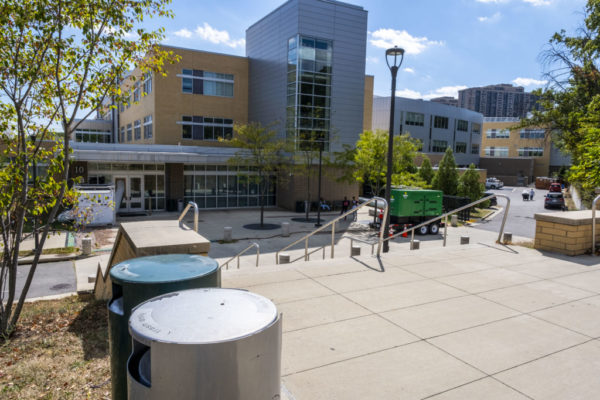 The following op-ed was written by Levi Novey, Laura Watchman, and Elenor Hodges, members of the Superintendent’s Advisory Committee on Sustainability.

Last December, Aracely Vance, a teacher at Claremont Elementary School, was tasked with figuring out what to show in the primary display case at the school entrance.

Aracely is a science teacher and is also very engaged with sustainability efforts. Recently she had learned that Claremont had one of the highest recycling rates among schools in the county. But she was also surprised. Anytime students, teachers, or parents discussed recycling at the school, the attitude was pessimistic. Few people believed that recycling was actually happening. A group that was frequently blamed for the perceived lack of recycling were the custodial staff. Aracely decided she wanted to tell a different story. She decided to make the display case a tribute to them, and feature them as “recycling heroes.”

Aracely’s idea would have an immediate impact at Claremont, and later an even larger impact than she originally could have imagined.

What she did inspired us and our colleagues with whom we serve on the Superintendent’s Advisory Committee for Sustainability for Arlington Public Schools (APS). We are a group of sustainability-focused professionals who have a connection to APS, either as parents, students, teachers, staff, or community members. Our charge is to help the school system find ways to be more sustainable through both its operations and its teaching and learning.

This past year, the Sustainability Advisory Committee chose to have a major focus on helping schools to both reduce waste and increase their recycling. During committee discussions, we noted frequently that we needed to change misperceptions at schools about recycling. Like Aracely, we heard repeatedly that people think recycling does not actually happen and that the custodial staff are often to blame. In reality, our research indicates it is often the opposite, and that custodial staff are working hard to implement successful recycling programs. It’s worth noting that the recycling industry at large is undergoing a lot of changes, based on the economics of recycling items such as glass. It admittedly can cause a lot of confusion and frustration.

We also know from comprehensive site waste assessments conducted at eighteen schools this past year that APS has taken many positive steps. For instance, recycling and waste bins are available in most school classrooms, cafeterias, and hallways, as well as some signage. When you look inside bins, however, you can frequently find items that can be recycled in the trash. Items that are trash are also frequently put in recycling bins. In other words, there’s contamination and there is a lot of room for improvement from everyone.

While waste reduction and recycling can be complicated, we found that the simple action Aracely took had a profound impact. After she created the new display, the custodians beamed with pride after being honored. Aracely noticed that the small gesture and celebration actually further increased the motivation of custodians to lead recycling efforts, and empowered the entire school to work better together toward this goal.

The immediate question that came to mind was, “how can we get this to happen at other schools?” After some thought, we realized that there was currently no APS-wide day to recognize custodians, even though there are days to honor teachers, staff, administrative professionals, and crossing guards. After engaging with the APS Superintendent’s Office and the School Board, we are thrilled that this year in connection with National Custodial Worker Day, APS will take the first steps to make this part of its annual calendar.

We are acutely aware that the impact of custodians goes far beyond conservation and recycling. We want to positively reinforce the value they bring to the schools, which often goes unnoticed. We know that they often work late and long hours, and are sometimes tasked with unpleasant jobs. We also know that they are extremely important to contributing to the positive environment that APS schools provide for our students and community. We urge APS and the community to build on this initial day of recognition, to ensure that our custodial staff feel appreciated and valued.