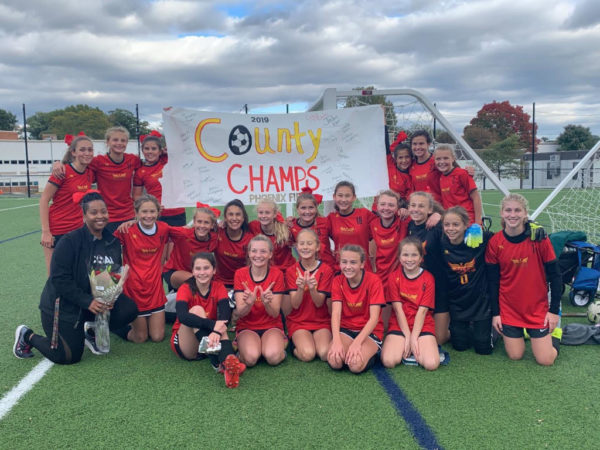 Dorothy Hamm Middle School has been open for less than a year, but the girls soccer team is already Arlington County champions, thanks to a group of enthusiastic players and Arlington County Police Department’s Detective Tiffanie Heggerty.

Heggerty has worked as a School Resource Officer in the county for four years, currently serving both Hamm and Taylor Elementary School.

“I thought it would be another great way to connect with students,” Heggerty said.

For the 2019-20 school year, Hamm students were pulled from nearby Williamsburg Middle School and Swanson Middle School. The team’s first season meant organizing a group of brand new teammates and practicing at a school still under construction.

“Finding places to practice took some creative effort,” Heggerty said. “Ms. Dabney, our Activities Coordinator, helped us get practice space at other schools, and we used the baseball field at the school when possible.”

Despite some setbacks, the team worked its way to an undefeated season (7-0-1).

“New team, new school, new coach, and we all had so much fun doing it,” said Heggerty. “Having a team that all got along, and played so well together is more than I could have hoped for, so winning on top of that is the icing on the cake.”

Now, Heggerty is coaching the boys soccer team at the middle school, and is hoping she’ll have similar success.

“The best part of being the School Resource Officer and coach is that I get to see my players throughout the day, and they bring their friends along to talk to me,” she said.

“This has helped me connect with more and more kids. Now adding the boys season beginning this week, when I walk the halls, I hear, ‘Hey Coach,’ and I know that they see me and not just my uniform.”

Across the county, many SROs volunteer their time as coaches of sports teams.

“ACPD is proud of the work the SROs do in their roles as officers, as well as through their work as coaches, mentors and advisors to students in Arlington outside the school day,” said ACPD spokeswoman Kirby Clark.

“One of our goals as a school division is to make sure that every student has at least one trusted adult that they can talk to,” said APS spokesman Frank Bellavia, pointing to the recent 2017 collaboration program between APS and ACPD, ACPD & APS Cares.

“Because our SROs interact with our students on a daily basis, they can be that one trusted adult that students can talk with.”