During my time working for Port City, the decision was made to bring its Session Rye IPA, Ways & Means, off the wider market and make it a tasting room house beer, I understood, but never completely got over it.

Beyond the recognition Ways & Means got in awards, it got national attention as a great example of what Session IPA could be. Also, I was a sucker for its combination of spicy rye malt character with big hop aromas and flavors, so I was happy to hear that six-packs of Ways & Means were coming back out.

With their arriving this week, I reached out to my former boss, Port City’s Bill Butcher, to get some more info on this returning favorite.

The first change you’ll notice with Ways & Means is its packaging. It has a very nice new label and six-pack design, a harbinger of full package rebranding to come in 2020. Changes can be found in the bottle as well as outside of it: over the time it spent as a house beer, the Ways & Means recipe was tweaked slightly but not insignificantly.

Like all Port City beers, Ways was and is packaged unfiltered; Bill Butcher told me during its time in the tasting room Ways started to be kegged unfined as well, with a warm dry-hop addition of 100% Citra hops to punch up the aromatics. Butcher tells me PCBC Head Brewer Jonathan Reeves likes to say they’re “‘using hazy techniques for our non-hazy beer’,” but you may notice a touch of cloudiness to your new Ways & Means. 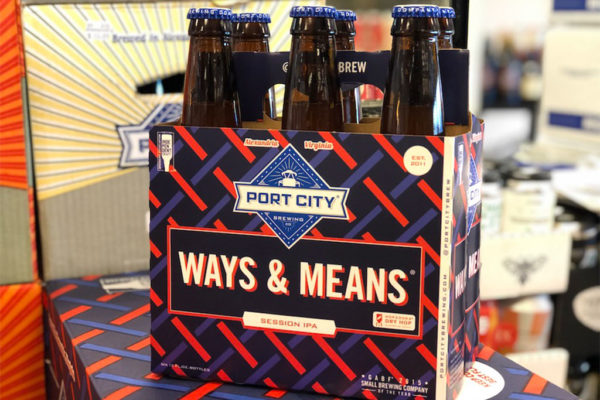 Asked why Ways & Means is reappearing now, Butcher cited “quite a bit of great feedback and demand for package” the beer had been receiving since going in-house. That’s not the only reason, however.

“Also, we are seeing lots of interest in lower alcohol, lower calorie beers. At 4.5% ABV, and 122 calories per bottle, this one fits the bill nicely.” He and the team at Port City decided to roll Ways back out now because they think “the hoppy flavor profile makes for a great fall session beer.”

Ways & Means isn’t going to be the only session-strength offering we’ll see from Port City during the next year; a new Session Ale will arrive for the spring, replacing Ways & Means on the market until the season comes around again. You can find Ways & Means in stock at Arrowine and stores around the area — but c’mon, buy it at Arrowine.

Until next time, which should be very interesting.