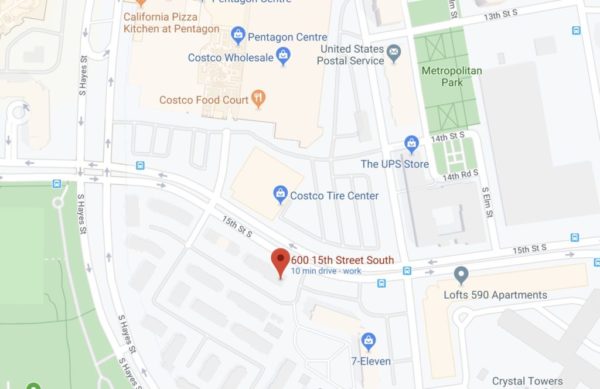 A man suspected of tampering with and damaging eight cars was arrested Tuesday afternoon in Pentagon City.

Police were first called to a parking garage on the 600 block of 15th Street N., near the Costco, around 1:15 p.m. for a report of a series of vehicle break-ins. While investigating the break-ins, officers identified a suspect, who then allegedly tried to flee the scene.

“Following a foot pursuit, the suspect was taken into custody by responding officers,” said Arlington County Police spokeswoman Ashley Savage. “The suspect was transported to an area hospital for evaluation. The investigation is ongoing and charges are pending.”

The man was combative with arresting officers, according to scanner traffic and a tipster.

“It took at least 6 officers to subdue the man and strap him down to a gurney,” the tipster told ARLnow. “He yelling and fighting… Police did a great job and stayed very professional.”

GRAND LARCENY (Significant), 2019-10290147, 600 block of 15th Street S. At approximately 1:18 p.m. on October 29, police were dispatched to the report of a suspect tampering with vehicles. Upon arrival, it was determined that security guards contacted police after locating several vehicles with damaged windows inside a parking garage and observing the suspect flee the scene on foot. Responding officers located the suspect with assistance from the security guards and following a brief foot pursuit, the combative suspect was placed under arrest. A subsequent search of the area located eight vehicles with damaged windows and items of value stolen from two of the vehicles. Duane Woolfolk, 20, of Washington D.C. was arrested and charged with Grand Larceny, Petit Larceny, Possession of Burglarious Tools, Possession of a Schedule II Drug, Destruction of Property, Failure to ID and Obstruction of Justice. He was held without bond.