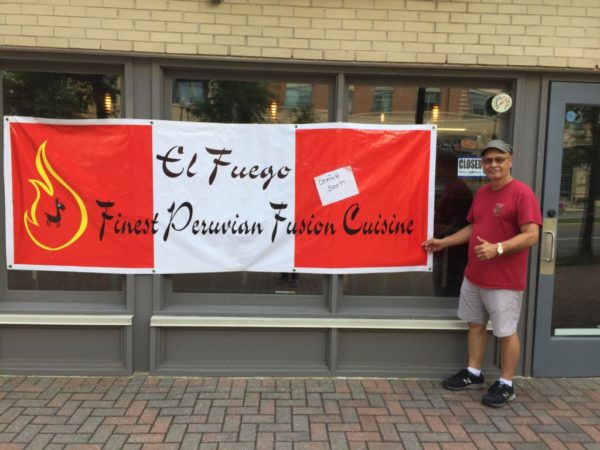 On the heels of its one-year anniversary in the county, El Fuego owner Manny Alfaro says new things are on the way, including a new drink menu with beer, wine, and Pisco cocktails — as soon as the restaurant obtains its Virginia ABC permit.

“Plus, something big is coming on Food Network for Father’s Day that I can’t say much about,” Aflaro said. “Stay tuned!”

The Lyon Park space is the brick-and-mortar location to El Fuego’s successful D.C. area food truck. Settling down after being mobile for years wasn’t easy, said Alfaro, but it’s been worth the effort.

But Alfaro, who likes to draw influences from other cultures, opened his business in order to have the freedom to cook outside the box. For example, Alfaro’s “aji de gallina” dish, made from pulled chicken, is wrapped in an egg roll with mozzarella cheese.

“We have the blessing of Peruvian cuisine’s incredible diversity and variety will always allow us to bring something fresh to the table,” he said.

“Neighbors, followers, old friends, all in all Arlington has been the most welcoming,” said Alfaro. “Exactly that, welcoming, and it’s been great.”