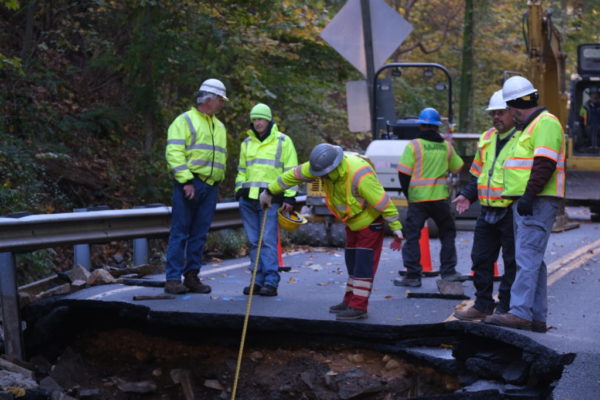 Update at 12:15 p.m. — N. Glebe Road has reopened but crews will need to return for follow up work “in a few days,” the county says. Photos posted earlier today show the sinkhole fixed and the roadway re-paved.

Update at 10:15 a.m. — The boil water advisory that much of Arlington has been under over the past couple of days is now lifted. Arlington’s Dept. of Environmental Services made the announcement Sunday morning.

OFFICIAL: The boil water advisory for portions of Arlington County has been lifted following tests showing the drinking water system is safe. Follow-up suggestions will be posted shortly at https://t.co/1OlbopFCOE. pic.twitter.com/LhBMtRAmAN

Following the large water transmission main break on Nov. 8 at Glebe Road and Chain Bridge Road, residents and businesses in Arlington can resume using tap water for all purposes.

Water customers are advised to run their taps for a few minutes to release any air and sediment that may have accumulated following the break. Emptying and cleaning automatic ice makers and water chillers is also encouraged.

A series of rigorous tests have determined that the system is safe following the significant water main break early Friday, Nov. 8, that caused pressure drops in several locations across the County. Because of significant pressure loss before the 36-inch transmission line was bypassed, Arlington issued a Boil Water Advisory for affected areas of the County as a safety measure.

Tests identified no potentially threatening bacteria in the system as a result of the break, and samples met Environmental Protection Agency (EPA) standards. The County consulted with the Virginia Department of Health (VDH) to ensure the water system is safe for public use.

Arlington County appreciates the patience and understanding of its residents, businesses and their customers as staff followed procedures that place public health and safety as the highest priority.

The incident also affected portions of the Arlington-linked DC Water system, which has also been deemed safe following tests.

The section of North Glebe Road damaged by the break near Chain Bridge is expected to reopen to traffic Sunday afternoon. Because of the complexity of the break, permanent repairs and restoration will continue later this week, depending on the weather.

The boil water advisory is in effect until at least Sunday, Arlington’s Dept. of Environmental Services said Saturday morning.

N. Glebe Road, meanwhile, is still closed, but expected to open by Sunday evening — a shorter closure than the initial worst case scenario of extending into next week.

Among other neighborhoods, the boil water advisory is in effect along the Orange Line corridor from Rosslyn to Ballston. That has prompted changes at local stores and restaurants, from soda machines shut off to bottled water used to wash hands in bathrooms.

The CVS in Courthouse, meanwhile, ran out of most packs of bottled water on Saturday, the Washington Post reported, and Starbucks stores up and down Wilson Blvd are not serving hot coffee — leading some customers to get “a little nasty,” a manager told the Post.

The Day After: The big water main repair at Glebe Road near Chain Bridge is fully stabilized and the roadway is expected to reopen to traffic Sunday pm. Boil Water Advisory for eastern Arlington still in effect at least into tomorrow. What to do/map links: https://t.co/7lHsjyMXZz pic.twitter.com/fSry3CeLIu

Huge kudos to the crew working round the clock to get Glebe Rd into Chain Bridge patched up after #Watermaingate2k19 in Arlington. Thought this would a week long affair—this puppy could be good to go by Monday. @ARLnowDOTcom @ArlingtonVA pic.twitter.com/9aNlHL56zg