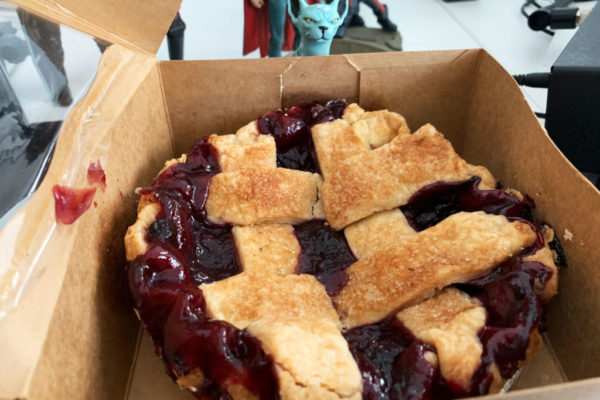 With Thanksgiving just around the corner, Arlington’s Acme Pie Co. has earned kudos from People for the Ethical Treatment of Animals for its vegan blackberry pie.

The animal rights group announced in a press release yesterday (Wednesday) its list of “Top 10 Vegan Pies (and 2 Honorable Mentions) for Thanksgiving.”

“Acme Pie Co.’s Blackberry Pie is as delicious as it is kind to animals, and it’s the perfect way to end a Thanksgiving meal,” said PETA President Ingrid Newkirk.

The Blackberry with a Hint of Lime pie is made of fresh blackberries, lime, and clove, criss-crossed with a lattice crust. Instead of using butter or cream, the bakery uses tapioca in the filling.

After five years of selling pies out of a basement kitchen, Acme Pie opened a retail store at 2803 Columbia Pike earlier this year.

In June, Acme Pie founder Sol Schott told ARLnow they’re churning out around 20,000 pies a year. The blackberry pie — which Schott’s favorite — is inspired by going blackberry picking and making the pies with his mother as a child.