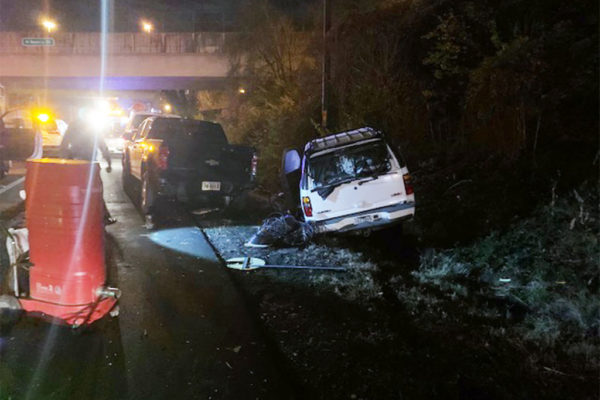 (Updated at 3:40 p.m.) Six highway workers along I-66 in Arlington were injured, four seriously, after an alleged DUI driver plowed into their work zone overnight.

The crash happened around 12:30 a.m. on I-66 near the N. Quincy Street overpass. Virginia State Police say the driver of a GMC Yukon veered into an active work zone, striking the half dozen workers before slamming into a light pole.

The driver was arrested for DUI and two passengers who allegedly tried to flee the scene were apprehended by Arlington County Police nearby, according to VSP. The six workers and two of the GMC occupants were brought to local hospitals, but all are expected to survive.

Initially, some of the injuries were reported to be critical and potentially life-threatening. A task force of Arlington and Fairfax County medics treated and transported the eight injured people.

At 12:29 a.m. Thursday (Dec. 5), Virginia State Police responded to a crash within a Highway Work Zone in the westbound lanes of I-66 at Quincy Street near Exit 72 in Arlington County.

A GMC Yukon traveling west on I-66 swerved into the active Work Zone and struck six highway construction workers. The vehicle continued off the right side of the I-66 and crashed into a light pole.

There were three occupants in the GMC. The driver and a passenger in the GMC fled the scene on foot. State police and Arlington Police apprehended the two near the scene.

Arlington County Fire transported a total of eight individuals. Four of the highway workers are still being treated at Fairfax Inova for serious, but non-life threatening, injuries. Two other highway workers and the two male GMC passengers were transported to George Washington University Hospital for treatment of minor injuries.

The driver of the Yukon, Kevin L. Blyther, 44, of Centreville, Va., has been charged with driving while intoxicated, one felony count for failure to stop at the scene of a crash involving an injury and one count of driving on a suspended/revoked license. Blyther is being held at the Arlington County Adult Detention Center.

There was a Virginia State Police vehicle positioned in the work zone with its blue lights flashing and the work zone was equipped with additional safety equipment and amber flashing lights to alert motorists of the active Highway Work Zone.

The crash remains under investigation.

This is not Blyther’s first serious run-in with the law. In 2017, he was arrested in Centreville following what police described as a six-hour barricade situation and domestic assault.

VDOT, meanwhile, is thanking social media users for an “outpouring of support” for the contractors who were struck.

We are really touched and overwhelmed by the outpouring of support for our injured friends. Rest assured that we are compiling every single tweet to send to them as virtual get well cards. Thank you for being so kind, friends. We have the best Twitter followers.❤️ https://t.co/2Nnu9QPST2