Everyone’s been asking me how I’ve been enjoying my “vacation” while we’ve been remodeling at Arrowine.

Well, I’ve been working pretty hard most of that time, so once I’ve apologized for my reaction I mention that I did carve out some time during the week to pay a long overdue visit to my friends at what I consider the area’s best brewery, Ocelot.

The first thing many of us think about from Ocelot are their IPAs, and as always they delivered. Home, their go-to 6.7% ABV IPA, was as good as I remembered. The combo of Citra and Nelson Sauvin hops often works well, but not every brewery uses Nelson right; Ocelot always gets good stuff from using Nelson.

I tried a couple of the rotating IPAs: Two Lost Souls featured Citra and Mosaic and was an absolute banger, giving off a lot of the “just opened a package of hops pellets vibe that I love so much in Reason’s Pattern Recognition. Having said that, I think I appreciated Vandals a bit more. It was just a bit lower in strength (a hair under 7%) than Two Lost Souls, and paired Mosaic with Galaxy. Not nearly as “loud” with it’s hoppiness, but felt more balanced and elegant.

Musaq, an 8% Double IPA brewed with the folks from Pure Project Brewing in San Diego, was a full-on Southern Hemisphere tropical fruit bomb with Citra, Kohatu, Waimea and Vic Secret. Yes, I took some home.

The stars of the day, however, were Ocelot’s Lagers. Sunnyside Dweller remains as nice a Pilsner as you’ll find in the area, and yes, I took some home. But I got to try their other Pilsner, Lamp. Lamp uses the newer Huell Melon hop from Germany, which in a lot of Hazy IPAs is way overused for the sake of extracting as much of its namesake’s fruit character as possible, but I think it’s actually best applied to beers like this — lower alcohol, easy-drinkers that let it be the pretty, subtle thing it actually is. Yes, I took some home. 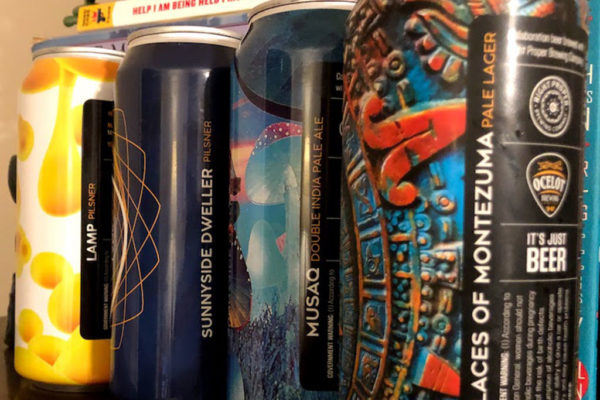 Last up was Palaces Of Montezuma, a lager made in collaboration with Right Proper Brewing of D.C. to celebrate the wedding of the great Phil Runco, who deftly handles all things beer for Brightest Young Things. It’s made almost as a Lager version of Home, with the same Citra/Nelson Sauvin combo but working a little rye malt in, too. It’s just hoppy enough to stand out, but still refreshing and easy to enjoy. Yes, I took some home.

So, when will you see some of these at Arrowine? Well, as you read this, we’ll be newly reopened from an insane week of rebuilding and remodeling. In fact, right around the time this posts the last installation work should be wrapping up on the draft station, so look for info on beers for growler fills starting next week!