After five years in Arlington, Eastern Foundry — a co-working incubator focused on government contractors as tenants — has expanded outside of Virginia. 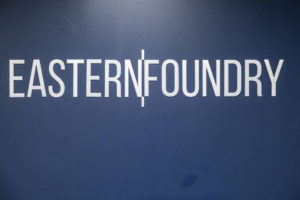 In September, the company opened its third location in Fayetteville, North Caroline, ten minutes way from Fort Bragg — the largest Army installation in the world.

“When we were thinking about our next expansion, we were looking at places that would be both affordable and expand our network access, and Fort Bragg was perfect,” said Regina Burke, director of client operations and development for the company.

“In Fayetteville, we can still have a strong reach from other North Carolina cities like Raleigh, Charlotte, and Greenville, so in addition to soldiers who choose to stay in the area after being stationed in Fort Bragg, we get government workers from all over,” Burke said.

The Fayetteville campus features three conference rooms for up to fifty people, a rooftop deck, and flexible space for both private offices and single workers.

“As an Army veteran, I know how important the units and contractors in and around Ft. Bragg are to our nation, so I’ve wanted to open a location here for years,” said Eastern Foundry co-founder Andrew Chang, in a statement. “The access to government tailored business support services can act as a major catalyst to any business looking to grow.”

In addition to their latest outpost, Eastern Foundry has also expanded both of its Rosslyn and Crystal City offices by about 15,000 square feet each, according to Burke. 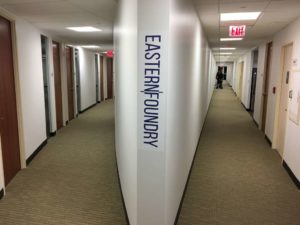 “We still have a few vacancies left in our Rosslyn space, but that’s about it,” Burke said.

By solely leasing office space to government contractors, Eastern Foundry creates a unique, collaborative ecosystem for people to share ideas and have an open discussion.

“There’s a stereotype that government contracting is dog-eat-dog– which is not true,” Burke said. “When companies come to our space, that wall that they have kind of comes down.”

Going forward, the company is still easing into their its space, but is now looking to continue to expand nationwide.

“We would love to find a place in Tampa, Florida, or Huntsville, Alabama, these cities where there’s a need for both government contractors and co-working spaces,” said Burke.