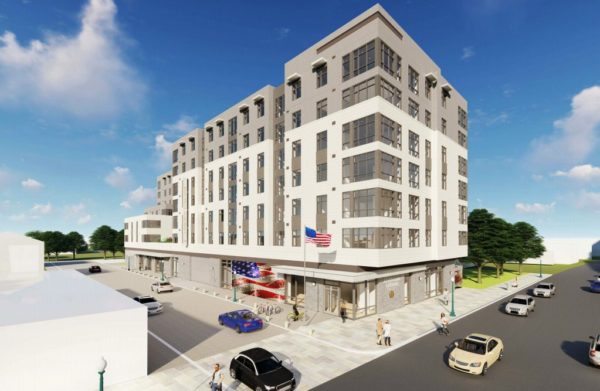 The Arlington County Board is set to consider allocating millions of dollars into two affordable housing developments, per the agenda for the Board’s meeting this Saturday, December 14.

In the agenda’s first affordable housing item, County Manager Mark Schwartz has recommended the Board approve nearly $14 million in taxpayer-funded loans for the development of the Terwilliger Place Apartments at 3445 Washington Blvd.

The American Legion post in Virginia Square will be redeveloped with a seven-story, 160-unit residential building, with apartments prioritized for former veterans and a space for the legion.

In August, Arlington couple Ron and Frances Terwilliger donated $1.5 million to the development, giving it its namesake. Recently, Amazon also allocated $1 million from its June affordable housing donation to the project.

The project is expected to be completed “no later than December 2022,” per the staff report, and the total cost is estimated to be approximately $37 million.

In the second affordable housing item, Schwartz has recommended the Board allocate $11 million of county and federal funds to assist with the development and construction for The Cadence, a new affordable apartment complex with 97 committed affordable units to be located at 4333 Arlington Blvd.

The site plans include the demolition of a former Red Cross building, along with two single-family homes. Nineteen market-rate townhouses will also be constructed.

The total cost of the project is estimated to be $47.2 million.

In July, the county applied for an allocation of the Virginia Housing Development Authority’s REACH funds, part of the state incentive package for Amazon’s HQ2, for The Cadence. If approved, 12 units in the building will be designated for those with incomes 40% or below the Area Median Income.