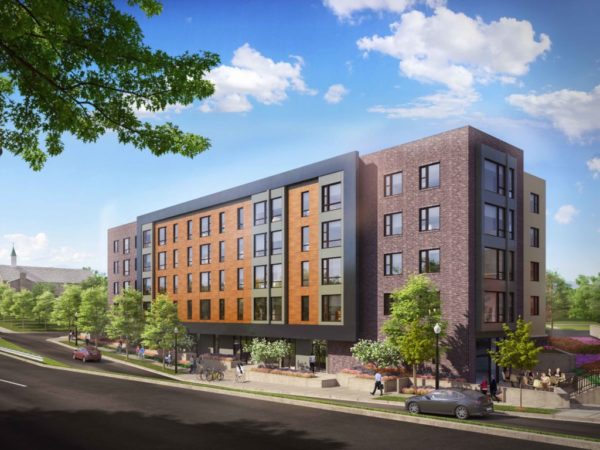 Local affordable housing non-profit Wesley Housing Development Corporation is staffing up as it prepares to take on more projects.

“We’re at about 100 employees in total,” said the nonprofit’s President Shelley Murphy. “This time last year we were about 80ish.”

Most of those employees have been added to the nonprofit’s property management team, which manages buildings throughout Northern Virginia. The rest of the new hires have been added to Wesley’s real estate department (around 10) and a housing stability team (3) that connects tenants with social services to help them stay housed.

One big project in Arlington that necessitated new hires was Wesley’s redevelopment of the Red Cross site at 4333 Arlington Boulevard in Buckingham. The planned mixed-income community, dubbed The Cadence, will feature 97 affordable apartments and 19 market-rate townhomes. Murphy expects to break ground on the project next year.

Recently, the nonprofit added a senior project manager and a senior construction manager to the Buckingham development, as well as a real estate development associate, per a press release earlier this month.

“By adding three new team members to the real estate development team, we will be well-equipped to continue addressing the affordable housing crisis in this region,” said Murphy in a statement.

While Wesley officials did not mention Amazon’s forthcoming HQ2 in Arlington as an impetus for its growth, the new headquarters is expected to exacerbate the county’s longstanding struggle to replenish its affordable housing stock.

Amazon announced last month that it would donate $3 million to local affordable housing and support services. Additionally, the tech and retail giant would match employee donations to local housing nonprofits — including Wesley — up to $5 million through the end of September.

When it comes to Amazon, Murphy acknowledged HQ2 speculation has raised property values and rents which could make her work more difficult. But overall, she said the company’s arrival portends good things for the county.

“The fact is that the 25,000 jobs that they’re adding over the course of 10 years are the same jobs that we lost with BRAC a few years ago,” she said, referring to the thousands of jobs Arlington lost due to Department of Defense restructuring that started in 2005.

In her opinion, the heated debates over Amazon’s potential to shrink Arlington’s affordable housing stock have been healthy for the community.

“All the sudden, our leadership is talking about it, they’re investing in it, there’s a regional conversation,” said Murphy, who commended the Arlington County Board for investing in housing projects and supporting a variety of affordable housing initiatives.