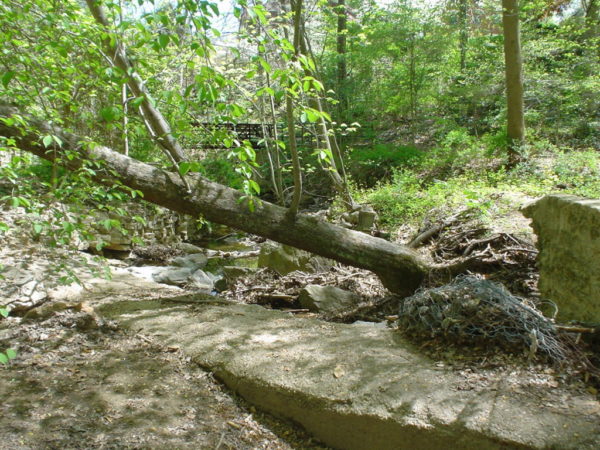 In the midst of Arlington’s efforts to protect local streams, the county last week released an extensive guide debunking what it says are common stream restoration “myths,” touching on everything from ecology to rain gardens.

The following six “myths” were challenged by the county:

When storms occur and water builds in steams, the resulting erosion can cause health issues for water-based wildlife and create infrastructure challenges. In order to prevent erosion, restoration alters the stream’s direction and adds step-pool structures to slow water flow, the county said.

Arlington’s stream restoration projects aren’t without its critics, especially when it comes to the touchy subject of tree removal in Myth #3.

In an email sent to ARLnow, Suzanne Sundburg, a local environmental activist and member of the Arlington Tree Action Group, argues the opposite — “planting trees… ABSOLUTELY DOES reduce the stormwater runoff,” she wrote.

“These stream restoration projects, as implemented in Arlington County, use heavy equipment that involves significant tree loss in the very riparian areas that are supposed to be protected from tree loss and development,” said Sundburg.

“Maintenance of our streams and their banks isn’t the issue and thus stream ‘restoration’ is not the solution,” she wrote. “The underlying cause of urban stream syndrome is the increasing volume and speed of runoff coming from the watershed. Unless and until the county begins to correct and reverse the increase in impervious surfaces — now covering 45% of the county’s land surface — stream restoration is impossible.”

Local advocacy groups have previously sounded off against tree removal, namely in 2017 when local residents launched a petition against the removal of 70 trees in Donaldson Run.

Currently, the county is in the design phase of its Gulf Branch Stream Restoration project, which is intended to protect the waterway and the trees along its banks.

A Gulf Branch-specific “Myths and Misconceptions” was presented during a November 6 community meeting on the project. In the presentation, officials addressed the effects of the July 8 storm on the stream, noting the “unrestored stream segmented eroded tons of sediment, degrading and stressing habitat downstream.”