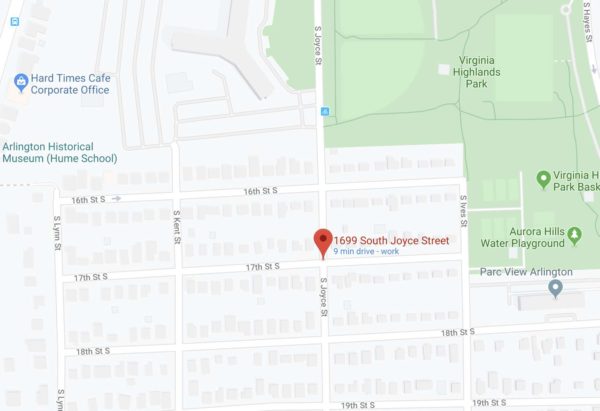 Arlington County Police are investigating a weekend shooting in the Arlington Ridge neighborhood, near Pentagon City.

The shooting happened early Sunday morning — around 3:45 a.m. — on the 1600 block of S. Joyce Street, near the RiverHouse apartment complex. Police say a man was shot and rushed to a hospital with serious but non-life threatening injuries.

Investigators believe the shooting followed a dispute with someone he knows. Thus far, police say they haven’t sought charges against anyone.

“Based on the preliminary investigation, this is an isolated incident with no ongoing threat to the community,” police said.

The Arlington County Police Department’s Homicide/Robbery Unit is investigating a shooting that took place in the Arlington Ridge neighborhood in the early morning hours of December 29, 2019.

At approximately 3:45 a.m., police were dispatched to the 1600 block of S. Joyce Street for the report of shots heard. Upon arrival, officers located a male subject suffering from a gunshot wound and immediately began performing emergency first aid until medics arrived. The subject was transported to an area hospital with serious but non-life-threatening injuries.

The investigation determined that a dispute between known parties preceded the shooting. All parties involved have been identified. This remains an active and ongoing criminal investigation and charges have not yet been sought. Based on the preliminary investigation, this is an isolated incident with no ongoing threat to the community.

Anyone with information related to this investigation is asked to contact Detective G. Seibert of the Arlington County Police Department’s Homicide/Robbery Unit at 703-228-4199 or [email protected] Information may also be provided anonymously through the Arlington County Crime Solvers hotline at 1-866-411-TIPS(8477).