I’m currently living an odd, opposite-day version of Dry January; let’s call it “Oh wow, there’s a lot of beer in the cellar and beer fridge I should get rid of some of those” January.

Pictured is the first round of culling, from a nice, dry, cold-year-round spot in my basement at home. They were kept exactly how you want to keep your beer, if you’re not going to put them in a fridge. I’ll give some praise to a couple standouts:

Brothers Brewing Mezcal Milkshake and Fütnote Boysenberry (2015) — I got these during the year I was a member of the Brothers Brewing Horizon Society. The Fütnote beers were a rotating series of pale Sours with a different fruit addition for each release. This Boysenberry bottle was a little flat, but flavor-wise much more put-together and mature than I’d expected.

Mezcal Milkshake is an Imperial Milk Stout with orange peel and aged in Tequila barrels. I’d been planning to bring it to a bottle share as I’m not much of a Tequila guy but obviously that never happened. It’s still not my thing but if it were, I would’ve been happy at how well it held up. 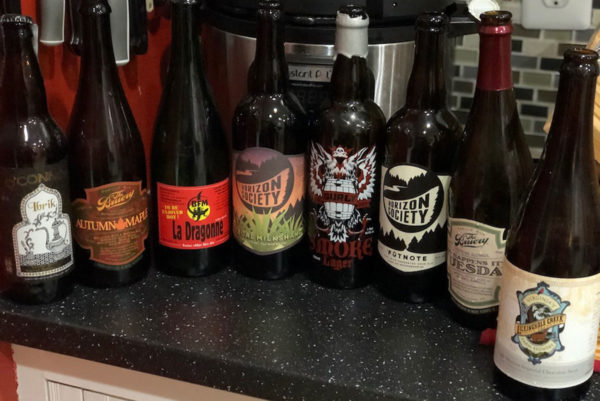 Surly Smoke (2012) — If I’d been up for taking down a 750mL bottle of 8.4% smoked Lager, I would’ve gone for it with this one. Using smoked malt from Bamberg and aged on oak, Smoke lived up to its name while allowing the richness of the non-smoked malt to come through and was deadly drinkable for its ABV. Impressive.

I’m not going call out the rest beer by beer, but among them I found multiple Brettanomyces (wild yeast) infections: One beer that wasn’t supposed to have Brett in it, for example, I would’ve sworn in a blind tasting to be a Sour. I started taking a video of one beer steadily gushing foam out of its top for some 30-45 seconds after having watched it steadily gush foam from its top for 30-45 seconds.

Some beers were overrun by the Brett that was there originally. One was an entirely undrinkable mess of a beverage. A couple had gone flat, and a couple had lost some of the characteristics that made me want them in the first place. Here’s the thing, though, and this is why I’m not calling all of these beers out for whatever flaws they had: The majority of my experiences with these beers is my fault.

I’ve never really been one to cellar a lot of beer, but there was a moment somewhere during 2014-2015 where I was reveling a bit in the access I had to new and different things, and it made a bit of a “that guy” out of me. I kept putting off opening beers for bottle shares that didn’t happen or nights where I’d want to get to them that never came around. That Sour that shouldn’t have been? If I’d opened it within a year of buying it, it would’ve been fine. It would’ve been what I wanted.

In mostly unrelated news, our draft station is now up and running at Arrowine for growler fills, and I’m hoping to have our can seamer working in the next few days for crowlers. You can follow our draft board in real-time on our Untappd page or on Arrowine.com.

Next time: I raid the beer fridge. Did the old stuff in there hold up any better?