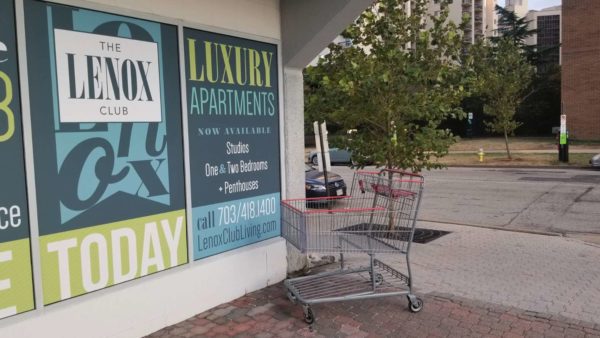 If state Sen. Scott Surovell’s (D-36) bill passes the Virginia legislature, businesses in Arlington could be on the line for recovering shopping carts people have taken but not returned.

Senate Bill 631 would make it so that the cost of removal, including disposal, of an abandoned shopping cart will be charged to the cart’s owner. The ordinance originally applied just to Fairfax County, but Surovell said Arlington and Alexandria asked to be included in the new legislation.

Surovell told the state Senate’s Local Government Committee that his frustration was borne out of years of personally pulling shopping carts out of a creek in Fairfax.

“These carts often end up in drainage ditches and when it rains they end up going in the creek,” Surovell said. “I’ve taken 230 shopping carts out of the creek myself.”

Abandoned shopping carts have been a plague on areas of Arlington, particularly the Pentagon City area, so prevalent they inspired Twitter accounts that have obsessively documented abandoned scooters around the area for the past several years.

The bill was reported from the Local Government Committee on a narrow 8-7 vote, where it faced pushback both on the dais and from public speakers. Parker Slaybaugh, executive director of the very newly formed nonprofit Virginia Food Industry Association, said the bill would make shopping carts the only stolen property where the victim of the theft is charged for its recovery.

That criticism was a recurring theme of opposition to the bill.

“If somebody steals your property, then abandon that, I don’t think you should be charged to have to go retrieve that property,” said State Sen. Bill DeSteph (R-82th District). “Businesses already paid to purchase it, [then] somebody stole it. The right thing to do would be to charge someone who stole it.”

DeSteph compared the proposal to requiring someone whose vehicle is stolen to retrieve the vehicle or pay for it to be recovered.

“It’s one of the points people raise every year and it’s totally wrong,” Surovell fired back. “To prove someone guilty of petty larceny [you] have to show intent to permanently deprive someone of something. The reason you don’t see these people charged with crimes is because it’s not a crime.”

Surovell said the legislation included a section that would allow localities to make it a civil infraction to take the carts from the business owner, though a police officer speaking at the meeting who claimed to have arrested someone for stealing a shopping cart disagreed with Surovell’s statement that it wasn’t a crime.

Sarah Taylor, Alexandria’s legislative director, said the city had asked to join the ordinance to give them another “tool in a toolbox” to encourage businesses to better manage their carts, such as geofencing.

Surovell also noted that at ALDI, customers put a quarter in to get the cart, get a quarter back when it is returned.

“It’s not about punishing the victim,” Surovell argued. “Retailers could take steps to keep this from happening, they just choose not to do it.”

Three Arlington County parks — Thomas Jefferson Park, Towers Park and Marcey Road Park — could see substantial upgrades over the next year. Contracts to improve the amenities at these…

The Alexandria Symphony Orchestra starts off its new season on Oct. 2 with Beethoven’s Fifth Symphony and Gershwin’s Rhapsody in Blue.

Starting Oct. 1, the COVID-19 vaccine is required for most green card applicants. The latest Statutes of Liberty discusses exceptions, waiver requests and more.

The four final logo design recommendations are in, meaning the process of picking a new logo to adorn county flags, vehicles and stationery is nearly over. This Saturday, the County…