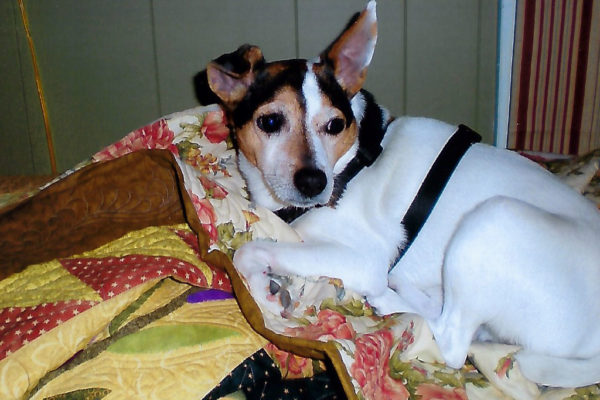 An older couple from South Carolina is trying to find the new adoptive owner of their dog, who’s likely somewhere in Arlington or Northern Virginia.

Janice and Chuck Davis gave Bullets, their rat terrier, up for adoption in late October. They were forced to call animal control on Bullets because he had violent tendencies that had become difficult to manage, Janice said. He was then picked up by Lucky Dog Animal Rescue, which has its headquarters in Arlington.

Bullets had a difficult life prior to his adoption by the South Carolina couple, which led to behavioral issues.

“We had [Bullets] for four years and he had been abused [before we adopted him],” said Janice. “Every time he felt threatened he bit us. We’re getting up in our age and we had an incident with him so we turned him in to animal control.”

However, the dog had left a lasting impression that the Davises did not fully realize until Bullets was gone.

“My husband didn’t realize how attached to the dog he was,” Janice said.

In their four years together Bullets and Chuck, who’s 80, developed a routine. They would get in Chuck’s truck and ride around their property in Florence, South Carolina together. The two would then sit in the car and keep an eye out for deer.

When Chuck was at home, he would sit down in his recliner and motion for Bullets to come and sit on his lap. Chuck would spread out a certain blanket, and Bullets would jump on.

Despite the good times, the Davises made the difficult decision to give Bullets up. They quickly regretted it, but by the time Chuck went to get Bullets back, he had already been taken to the Lucky Dog shelter.

Now, the couple is hoping to find the new owners of their dog, if for nothing else than to give Bullets his blanket.

Chuck “is missing this dog terribly and would just like to know if the new owner is pleased with [him] and if he is doing fine,” said Janice. “He would like to send the new owner Bullets’ favorite blanket.”

“We just want to make sure he is in a good home,” she added.

If Bullets’ new owner is reading this, email us at [email protected] and we can connect you with the couple