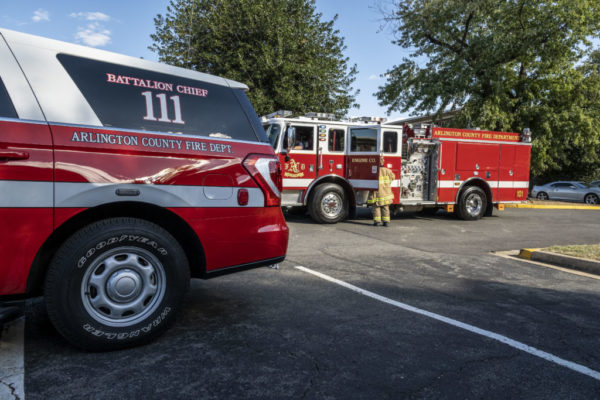 The “cultural exchange” is being arranged by the International Association of Fire Chiefs, according to department spokesman Capt. Justin Tirelli. ACFD is one of a number of U.S. fire departments hosting firefighters from Saudi Aramco, the largely government-owned national oil company of Saudi Arabia.

The goal of the exchange is to help Saudi Aramco’s firefighters — the company has its own fire department, staffed by both Saudi nationals and expats from the U.S. and elsewhere — improve their training and readiness, while also making professional connections with their American counterparts.

“They’re coming over to see how we do things,” said Tirelli, noting that the exchange is conducted as a professional courtesy and ACFD will not be compensated for the training.

“We consider it a good opportunity for our folks to broaden their perspective and improve their learning,” he said. “We want to make sure we’re representing the best values of American culture, and I don’t think you can do that without learning about other people’s culture and perspectives.”

Two senior officers from the Saudi fire department will be embedded with ACFD battalion chiefs, Tirelli said, while one senior inspector from the department will work with Arlington fire and building inspectors. The trio is expected to arrive in Arlington in late February.

The exchange is happening despite recent tensions between the U.S. and Saudi Arabia, stemming from the assassination of Washington Post columnist Jamal Khashoggi and the killing of three U.S. Navy sailors by a Saudi serviceman in Florida, among other incidents. ACFD, meanwhile, responds to calls at sensitive sites, including the Pentagon and other government facilities in the county.

Tirelli pointed out that Saudi Aramco is not a military organization and that “their mission is to protect facilities that impact the world.”

“The people who work at those facilities include a lot of Americans,” he said, adding that there have been no incidents from previous exchanges between Saudi Aramco and other U.S. fire departments, “only positive interactions.”

The Arlington County Fire Department conducts similar exchanges with firefighters from Arlington’s sister city of Aachen, Germany. Due to staffing shortages there are no plans for any ACFD members to go to Saudi Arabia, Tirelli said.

Read more →
More Stories
Lawmaker Who Wants to Return Arlington to D.C. has I-66 Reverse Toll Bill RejectedAIM’s Longtime Executive Director to Step Down Next Month