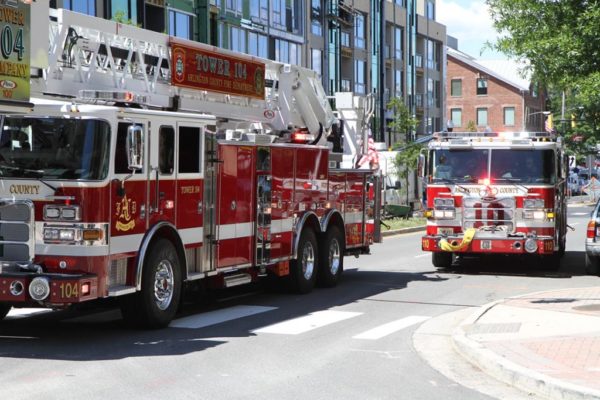 The Arlington County Fire Department’s overtime crisis is having a ripple effect on other programs, leaving training and logistics to take a hit.

Between the 2016 and 2018 fiscal years, the department exceeded its overtime budget every year.

At a meeting yesterday (Thursday) at county government headquarters, County Auditor Chris Horton met with Arlington officials and ACFD staff to review the recent audit of the department’s chronic overtime usage and suggestions to fix it.

One area where all involved parties agreed was that the overtime was the main source of the department’s fiscal troubles.

“Overtime use in the fire department has caused budget management challenges in  2016-2018 fiscal years,” Horton said. “What we did here was to look and see if there was actual, clear evidence mathematically that it was overtime driving the overages in the budget. What we’re seeing is strongly indicative that the callback overtime — that is increasing the overruns with total personnel costs — is increasing the overruns with total department costs.”

There were several issues cited as contributing factors to the overtime overuse, but one of the main problems is insufficient staffing. According to the audit:

At the core of the budget management issues are staffing challenges ACFD experiences throughout the department, including significant attrition in ACFD Operations. ACFD has been operating with decreases in staffing that continue to result in an average loss of more than two employees per month. With the rigorous screening processes and training required for new recruits, it takes almost 12 months and costs almost $100,000 per recruit to recruit, hire and train firefighters… Therefore, ACFD continues to face struggles with deploying adequate staffing even with recent budget increases to fund additional recruit classes.

Horton and fire department officials explained that staffing is required to be maintained at certain levels, and if there aren’t enough staff on hand to meet those levels, off-duty firefighters are either called back or asked to stay past their shift to meet those staffing levels. This callback overtime — as opposed to discretionary overtime — has exceeded its budget every year the audit studied.

“It’s very difficult to be fully staffed in public safety,” said County Manager Mark Schwartz. “We have to call people back and they come back. It’s not a healthy cycle for anyone involved. Over the last three of four years, the things that haven’t been done are as much training — that’s the main thing — and logistics. The department tries to get in under budget overall but there are things that get lost in that process.”

The audit notes that cuts had to be made in expenditure categories such as training and equipment to cover overtime costs.

“To stay within our budget, sometimes we have to throttle back stuff that’s not mission-critical,” Capt. Ben O’Bryant, a spokesman for ACFD, told ARLnow. “Training we’d like to send four people to maybe we’d send three, or equipment that we’d like to put in service, maybe we hold back on that. Nothing that’s mission critical for delivery of services… but sometimes we have to adjust our activities. Anything required to provide services to the county, we get that, but sometimes we don’t send as many people to elective training as we’d like to or we hold off on getting equipment.”

The county plans to hire 36 more firefighter/EMTs by 2022 to help alleviate the workload of the department’s remaining employees, but ACFD is also dealing with significant attrition: about two employees a month leave the department, according to Horton.

The audit recommended further studies of how to deal with the staffing problem, which was outside the scope of the audit but was noted as the root of the overtime problem. Fire Chief David Povlitz expressed partial agreement with recommendation, but said ACFD had sufficient “internal resources and analysts” to deliver the study.

Another problem raised in the audit was inconsistencies and incompatibilities in reporting overtime. The fire department uses one system to track hours and another system to manage payroll, and Horton noted that there are ways in which the two systems do not communicate. On the whole, the audit describes the payroll process as “complex and ineffective.”

County Board member Libby Garvey noted that there is clearly an “assumption of overtime” built into the system, and the end goal of the audit and ACFD reforms should be sufficient staffing and oversight to change that.