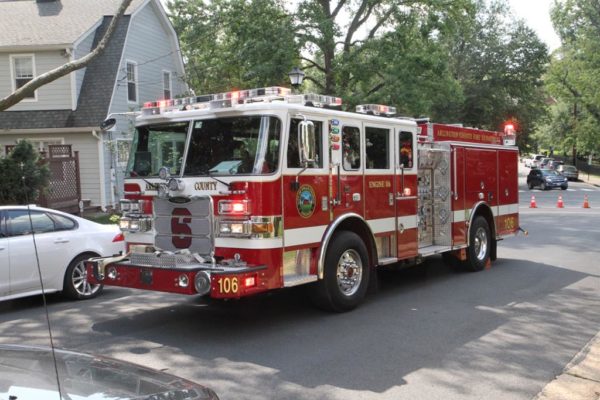 A new report found the Arlington County Fire Department has been regularly exceeding its overtime budget while putting firefighters at risk of fatigue and injury.

County Auditor Chris Horton blamed staffing shortages and a lack of payroll controls for the department exceeding both its overtime budget and personnel budget over the last three years. He noted that the overtime costs ranged from $5.2 million to $6.2 million per year, despite being budgeted at $3.2-3.4 million.

The department requires that firefighters work no longer than 60 hours in a single shift, and must take at least a six-hour break before starting new shift. However, the audit found that supervisors could override that requirement.

“The purpose of hours worked restrictions is to reduce responder fatigue, and improve safety, performance, and quality of life,” read the report. Horton recommended the department stick to its hours — as well as study whether firefighters may require more rest time between shifts.

“The commute for some personnel could be one or two hours each way,” wrote the report, noting that many firefighters live well outside the area. The report also noted a high level of sick leave could be caused by firefighters using their paid time off to catch up on sleep.

The audit issued 23 recommendations to address the time off and overtime problems, including that the create an “overarching departmental policy” on how to better monitor time off.

ACFD responded that they agreed with 20 of the recommendations. When it came to commission a staffing study, establishing better interagency communication, and budgeting for more overtime, Fire Chief David Povlitz disagreed with the need for additional resources, writing that ACFD could address those needs internally.

One reason the audit found for the unexpected overtimes expense was a lack of controls and efficient systems for payroll, which Horton noted, “creates cumbersome and inefficient processes and impairs overtime management.” 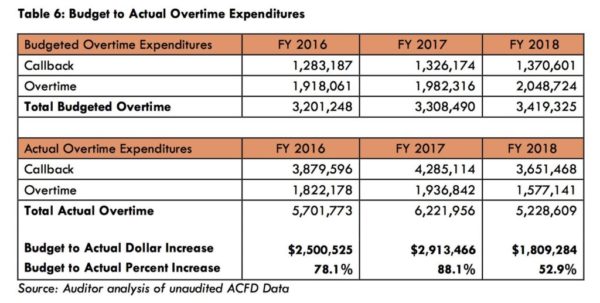 “At the core of the budget management issues are staffing challenges ACFD experiences through the department, including significant attrition in ACFD Operations,” he said. “ACFD continues to face struggles with deploying adequate staffing even with recent budget increases to fund additional recruit classes.”

Last year, firefighters joined police officers in protesting low wages, some saying the low starting pays made it impossible to live in Arlington with its rising cost of living. The county has responded to the demands by awarding 6 percent budget increases to ACFD for the last two years to raise wages and fund recruiting, but retention remains a problem: Horton noted the department loses an average of two employees every month.

Now, the county is aiming to hire 36 more firefighter and EMTs by 2022 to alleviate the workload of the department’s remaining employees.

Three months ago, Horton also found that the Arlington County Police Department had exceeded its overtime budget for the last three years. The auditor found that ACPD reported $5.46 million in overtime last year — twice the amount allocated in the department’s budget.

Povlitz noted that because “there are some similar findings between the Police and Fire Department Overtime Audits, all public safety agencies are planning process changes by utilizing a newly staff public safety time and attendance administrator position.”

County Manager Mark Schwartz said in a statement today (Thursday) that “the real message here is that we need a better and updated financial system.”