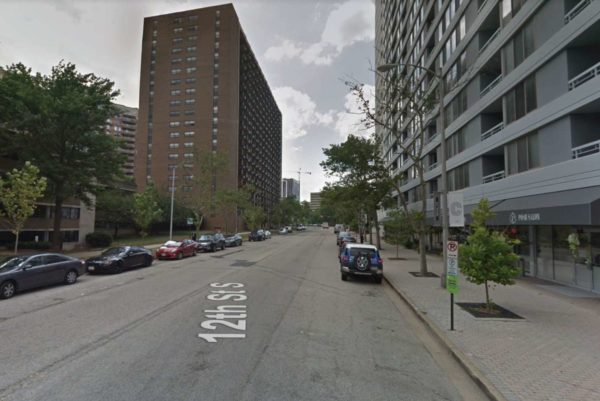 A Pentagon City resident was attacked and robbed while walking back to his apartment early Saturday morning.

The incident happened around 3 a.m. Saturday, on the 400 block of 12th Street S. — which is home to a pair of high rise residential buildings and is a block away from Amazon’s future, under-construction HQ2.

Police say the victim had just exited a vehicle and was walking back to his building “when he was approached from behind by three male suspects.”

“The suspects assaulted the victim and stole his phone and personal belongings, then fled on foot prior to police arrival,” Arlington County Police said in a crime report today. “Responding officers located the suspects and attempted to make contact with them, however, they fled on foot. Following a brief foot pursuit, one suspect was taken into custody. Two suspects remain outstanding.”

The victim reportedly suffered minor injuries. The suspect arrested is a juvenile and is now facing robbery charges, police said, adding that “the investigation is outgoing.”