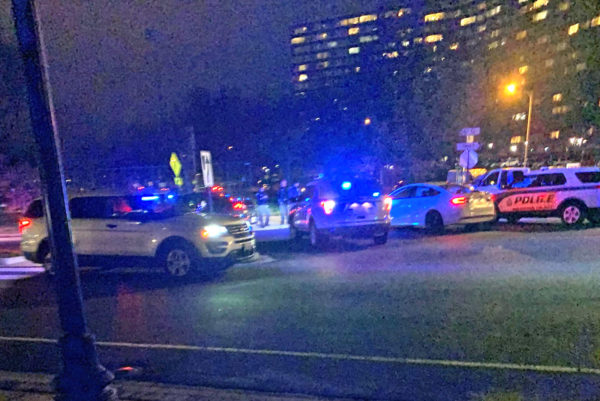 It’s been another busy few days for police in Pentagon City.

The neighborhood has been the scene of at least three armed carjackings in local parking garages over the past month, in addition to armed robberies and the usual steady flow of thefts from stores at the Pentagon City mall and other local shopping centers.

The criminal activity continued Sunday afternoon, when police arrested a man they say was breaking into parked cars in or near the Pentagon Row shopping center. More from Arlington County Police:

GRAND LARCENY (Significant), 2020-02090157, 900 block of Army Navy Drive. At approximately 3:40 p.m. on February 9, an officer on patrol observed a suspicious suspect looking into parked vehicles. The suspect allegedly attempted to enter a vehicle by pulling on the door’s handles before breaking the rear driver’s side door window and stealing a backpack in plain view. The suspect fled the scene on foot and was located by a responding officer inside the metro station. The suspect refused to comply with the officer’s lawful commands and attempted to flee the scene on foot. Upon arrival of additional units, the suspect was taken into custody without incident. Harvey Jones, 24, of Washington D.C. was arrested and charged with Possession of Burglarous Tools, Grand Larceny: Theft from Motor Vehicle, and Destruction of Property. He was also determined to be wanted out of North Carolina. He was held on no bond.

On Monday evening, meanwhile, also in the area of Pentagon Row, a woman was assaulted and robbed of her phone by a pair of young, female suspects. More from ACPD:

ROBBERY, 2020-02100201, 1300 block of S. Joyce Street. At approximately 5:42 p.m. on February 10, police were dispatched to the report of suspicious circumstances. Upon arrival, it was determined that as the victim exited a business, she passed the two female suspects, who began shouting at her. The victim continued walking, however the suspects began chasing her. The suspects assaulted the victim and stole her phone, then fled prior to police arrival. Suspect one is described as a juvenile or young adult female, approximately 14-18 years old, short, thin, with curly shoulder-length hair, wearing black pants, a black jacket and white and black shoes. Suspect Two is described as as a juvenile or young adult female, approximately 14-18 years old, approximately 5’4″-5’8″, with a chubby build, wearing jeans, a white shirt and a black and orange jacket. The investigation is ongoing.

Last night (Tuesday), an incident at the intersection of S. Joyce Street and 15th Street S., near one of the entrances to the mall’s parking garage, drew another large police response. Police said only that an “assault occurred following a dispute” and the activity was unrelated to the carjackings.

Police responded to the report of a simple assault. No significant injuries reported. Investigation is ongoing.

The assault occurred following a dispute. There is no indication of a larger threat to the public related to this investigation.

As of last week ABC 7 reported that there had been five armed robberies in the Pentagon City area so far this year, compared to 7 last year and 5 in 2018.