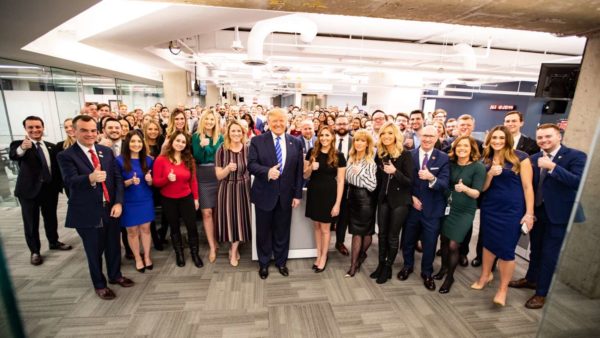 President Trump made a surprise visit to his reelection campaign’s office in Rosslyn around lunchtime today.

The president was accompanied by his son-in-law and advisor Jared Kushner, and campaign manager Brad Parscale. For about an hour he took meetings and greeted campaign staff, congratulating them on a more than $60 million fundraising haul in January.

Arlington County Police assisted with the motorcade from the White House to the campaign office.

Trump posed for a photo with staffers, who work out of what’s been described as a “Republican National Committee annex” in “a glass-skinned tower overlooking the Potomac River.” The address is not publicly available.

"Motorcade arrived at the RNC Annex Office in Arlington, VA at 11:31am. Your pooler is told POTUS is here for meetings and to thank campaign officials. … Sr. WH advisor Jared Kushner and campaign manager Brad Parscale were seen departing the White House with POTUS."

POTUS has made a surprise visit this morning to the RNC's Annex Office in Arlington for meetings and to thank campaign officials. It was not on his daily public schedule/press guidance.