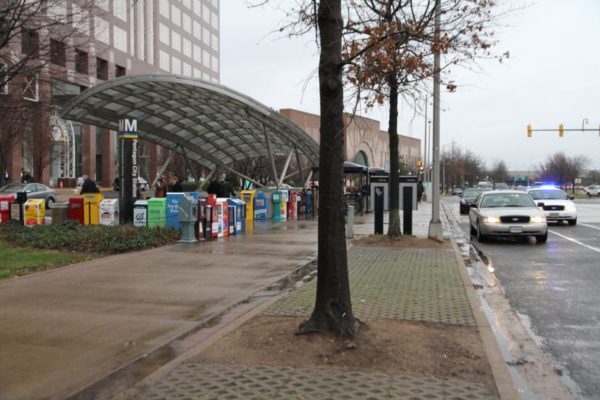 A pair of incidents at Arlington’s two shopping malls led to four arrests and charges against six people.

The first incident happened Wednesday afternoon at the Pentagon City mall. Around 3 p.m., according to Arlington County Police, two juvenile suspects shoplifted from a store and were soon thereafter located by officers at the Pentagon City Metro station. One of the suspects lashed out violently, spitting on and hitting officers, according to police.

ASSAULT ON LAW ENFORCEMENT, 2020-02190151, 1100 block of S. Hayes Street. At approximately 2:56 p.m. on February 19, police were dispatched to the report of shoplifting. Upon arrival, it was determined that suspects allegedly entered a business, stole items of value, and fled on foot. A lookout was broadcast and arriving officers located the juvenile suspects on the metro platform. One suspect actively resisted by pushing, elbowing and spitting on the two arresting officers. Once detained, she continued to resist and kicked two additional officers. Petitions for Assault and Battery on Police (x4) and Obstruction of Justice were sought for Suspect One. Petitions for Petit Larceny, Fugitive from Justice and Identity Theft were sought for Suspect Two.

Later Wednesday evening, four juvenile suspects allegedly shoplifted from a store at the Ballston Quarter mall. A security officer who tried to chase after and stop the group was pepper sprayed by one of the suspects, police say.

In coordination with Metro Transit Police, two suspects were later taken into custody at the Rosslyn Metro station.

MALICIOUS WOUNDING BY CAUSTIC SUBSTANCE, 2020-02190225, 700 block of N. Glebe Road. At approximately 7:26 p.m. on February 19, police were dispatched to the report of an assault with injury. Upon arrival, it was determined that the victim was working as loss prevention for a business when he observed a group of juvenile suspects allegedly selecting and concealing merchandise. When he attempted to stop the group as they exited the business, they fled. The victim attempted to chase the suspects when one suspect allegedly dropped the merchandise he had, then pepper sprayed the victim. A lookout was broadcast and officers located and made contact with the suspects at the Rosslyn Metro Station and, with the assistance of Metro Transit Police, took them into custody without incident. Petitions were obtained for Suspect One for Malicious Wounding by Caustic Agent, Robbery, Grand Larceny and Possession of Burglarous Tools. Petitions for Conspiracy to Commit Felony and Grand Larceny were obtained for Suspect Two. Two additional suspects remain outstanding.