D.C.’s ANXO Cider is a favorite here at Arrowine and, as you might infer, of mine as well.

ANXO’s style is built around zero-adjunct, wine or native yeast fermented, completely dry ciders. The results have been a showcase for the apples used: mostly sourced from here in Virginia along with some from Pennsylvania, but in some cases including varieties from Oregon and Washington — including a very cool red-fleshed apple from Washington used to make their Rosé with no hibiscus or other coloring adjunct.

Among the best-received special releases from ANXO last year was a cider then called Intercontinental, recently re-released under its new name, Hereford Gold.

To make Hereford Gold, ANXO partnered up with Oliver’s Cider and Perry of Ocle Pychard in Herefordshire, England. The process involves Oliver’s sending some of their native yeast-fermented, wood-aged cider to D.C., where ANXO blends it with stainless steel-fermented, Pennsylvania-grown Goldrush apple cider.

The result is a truly complimentary blend of ingredients and styles. The classically earthy, slightly funky English cider of Oliver’s is balanced by the fruitier but no less dry American cider. The ciders have a harmonious acidity level, and while Hereford Gold is still pretty tannic by American standards, it is nonetheless tempered a bit by the Goldrush. 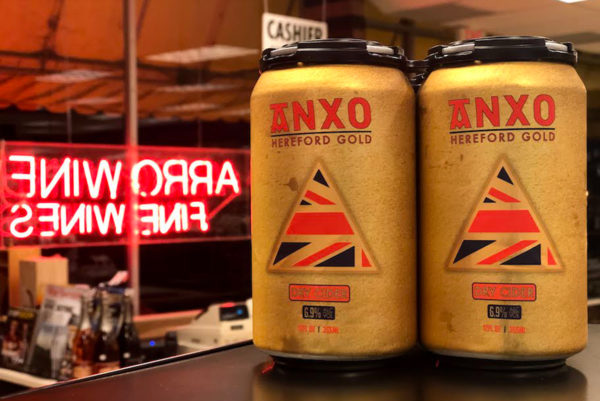 You can find cans of Hereford Gold around NoVA right now, but there was one sixtel (small keg, 5.17 gallons) that came through — and by now I think you know who has that. It just so happens that our friends from ANXO will be joining us here at Arrowine this very evening, February 28, from 5-7 p.m. for a sampling of Hereford Gold as well as some of their year-round offerings. It’s my first cider keg, so I’m pretty excited.

I hope to see you there, and if I don’t come find me around the shop and I’ll be happy to guide you through our ANXO stock anytime.