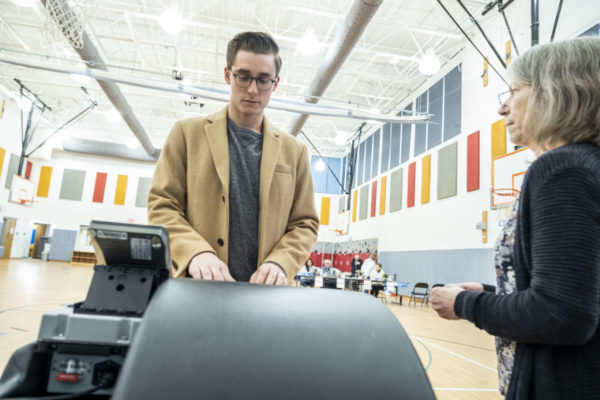 Joe Biden had a commanding lead in nearly every Arlington precinct in yesterday’s Super Tuesday race, but Arlington’s second-choice was not as universal.

Amid record presidential primary turnout in Arlington, a plurality of voters countywide cast ballots for Joe Biden. Biden garnered 48% of the vote, to 20% for Warren, 19% for Sanders and 10% for Bloomberg — who suspended his campaign today and endorsed Biden.

While Biden tended to score higher in the lower-density residential neighborhoods of Arlington, the former Vice President’s support was not quite as strong along Metro corridors and Columbia Pike, according to figures from the Virginia Department of Elections.

Along Arlington’s two Metro corridors, Biden won every precinct but rarely with more than 50% of the vote. Countywide, Biden only dipped below 40% in two precincts — one along the Pike and one near Rosslyn.

Along the Metro corridors it was predominately Warren holding the second place, though along Columbia Pike Sanders held leads in some precincts. In Ballston, Biden won 47% of the vote while Sanders and Warren won 23% and 21% respectively. In Crystal City it was 46% with Warren at 22%.

In the wealthier, northernmost precincts of Arlington, Bloomberg won his sole second-place finishes in Arlington in the Rock Spring, Madison, and Thrifton precincts. In each of those, however, Bloomberg never won more than 17% of the vote.

In only one place did Biden lose: the Campbell precinct, encompassing an area on Arlington’s western end of Columbia Pike. Sanders won 40% (310 votes) and Biden followed with 37% (282 votes). In 2016, Sanders lost the precinct to Clinton, who got 69% of the vote there.

The biggest anomaly of the night was the absentee voting results. A number of candidates who had since dropped out of the race received significant absentee vote totals in advance of Super Tuesday, notably Amy Klobuchar (9%) and Pete Buttigieg (16%). Klobuchar and Buttigieg — who held a large rally in Arlington last month — both dropped out and endorsed Biden after his South Carolina primary win over the weekend.

Among active candidates, Warren came out on top of the absentee heap with 25%, followed by Biden with 19%, Sanders with 16%, and Bloomberg with 14%.