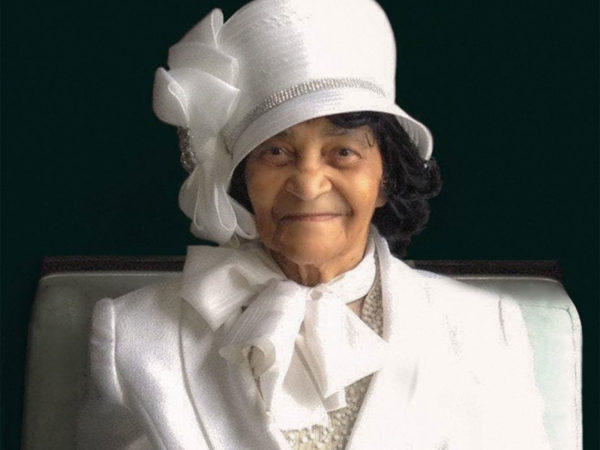 Sylvia Louise Jenkins was born in D.C. in 1936 and made a mark on the area through her faith, her volunteer work, and her family.

She lived in the District most of her life, but passed away in Arlington the Sunday before last, one of numerous assisted living facility residents in Arlington to succumb to the coronavirus.

“I would like to share her story, as she was such a remarkable woman and touched many lives,” LeVale Jenkins, her grandson, told ARLnow. “My grandmother… used her voice and influence to inspire many.”

Sylvia died at Virginia Hospital Center on April 19 from complications from COVID-19, which she contracted while a resident of the memory care section of Brookdale Senior Living in Virginia Square, Jenkins said.

Jenkins described, as others have, a significant outbreak at the facility.

Nationally and locally, assisted living facilities have been hit particularly hard by the virus. Arlington has six reported outbreaks in long-term care facilities, though the county has thus far not publicly revealed additional information about the outbreaks, citing concerns about privacy and creating “a false sense of security if people think there are more cases in a certain part of the Arlington Health District than in others.”

As of Wednesday, 32 people in Arlington have passed away from COVID-19.

Jenkins says Sylvia, a native Washingtonian, “was an extraordinary woman of God” who will be dearly missed by friends and her large, loving family, including a great-great grandson.

The full obituary is below.

Sylvia Louise Jenkins, 83, was born June 4, 1936 in Washington, DC. She was widely revered as Mother Jenkins and personified every aspect of a virtuous woman. She was a notable wife and the crown jewel to her beloved husband of sixty-one years, Deacon Kenneth Jenkins, Sr. Deacon and Mother Jenkins continued in a partnership of unity, love and worship until June 25, 2019 when he preceded her in death. She was never bashful in her declaration that one eventful day she would meet her Heavenly Father. On April 19, 2020, she departed this life to receive her long awaited heavenly reward.

Mother Sylvia Jenkins left an indelible mark on many lives as she plainly shared the depth of her spiritual journey of trials, triumphs, victories and the relentless joy that inspired her daily devotion to Jesus Christ. She had a missionary ministry and used her voice and influence as a source of strength, prayer and inspiration. She was known to uplift, counsel, spiritually motivate and compel countless people to discover the joy, peace and comfort of knowing Jesus Christ. Her spiritual journey began, March 17, 1966, over fifty-four years ago, when she described being baptized and experiencing one of the most miraculous and joyous encounters of the Holy Ghost. Her husband and children joined Bible Way Temple through the ministry of the late Bishop Smallwood Williams. This spiritual experience led to her many years of dedicated service across many clubs and ministries at Bible Way Temple.

In 1982, along with her husband and family, she joined the Holy Temple Churches of Christ, where for over thirty-five years, she worked in numerous auxiliaries, serving as a Senior Missionary, President of the New Members, Junior Church teacher, Assistant Director of Vacation Bible School and Advisor to the Usher Board. She was most proud of her unrelenting work with the churches newest members. She spent countless hours inspiring many members of the church. Graceful, elegant, and guided by wisdom, Mother Jenkins opened her hands to those in need and was an avid counselor to many. She was the 911 emergency telephone number for many to call, and a trusted source for prayer and spiritual guidance. She was an inspirational writer, musical directress, and even formed a musical group of her children and grandchildren that performed in churches and venues under her direction. She was artistic, and loved drawing, writing, singing and cooking. She was a devoted and faithful mother who nurtured divine life in her children and left a life-lasting imprint on them. She relished all of her grandchildren and made each one feel individually special. She was an extraordinary woman of God who sacrificed her vocation to assume the noblest role as the matriarch of the family.