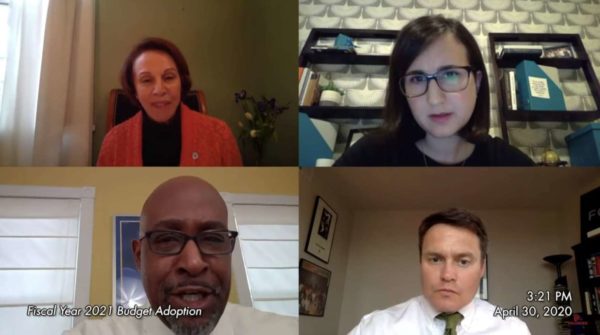 At its meeting this weekend, the Arlington County Board is set to formally approve an ordinance granting the county emergency powers to hold public meetings online instead of in person.

That codified what has been the county’s improvised practice during the pandemic, including during the recent county budget process. County Board meetings are being held online, as are public information sessions about things like plans for the revamped Metropolitan Park in Pentagon City and proposed changes to a crash-prone section of Route 50.

At a time when in-person meetings are not possible due to health concerns, online meetings have been deemed a good enough alternative to simply shutting down public processes or delaying local government decision-making on important issues.

The downside of these meetings is that there are still those — the elderly, the impoverished — without readily-available internet access. In the U.S., some 23% of the population still did not have a smartphone as of 2018.

But the upside is that for the majority of the population that does have internet access, it’s a lot easier to attend a virtual meeting at home, or watch it later online, than it is to show up at a physical location and spend an hour or more of a weekday evening or weekend morning at an in-person gathering. That’s doubly true for parents of young children and those with non-standard work schedules.

Indeed, a criticism leveled against the “Arlington Way” — the uniquely Arlington system of citizen engagement in county decision-making that has been in place for decades — is that such meetings are difficult for all but the most motivated residents to attend, and decision-making processes can drag on for months or even years.

An online poll conducted by ARLnow in late 2018 found that nearly 55% of respondents would prefer a streamlined community input process. More virtual meetings and online input, even beyond the pandemic, could be a step in that direction.

The ordinance being considered by the Board keeps the current state of affairs “in effect for six months from the end of the COVID-19 disaster, unless sooner repealed by the County Board.”

Should the county consider making virtual meetings a more regular feature of citizen participation beyond that? Not totally replacing in-person meetings and input, but maybe becoming the predominant way to engage residents. And perhaps the current slate of virtual meetings can be expanded beyond Board meetings, town halls and project information sessions to incorporate the “cancelled until further notice” commission meetings.